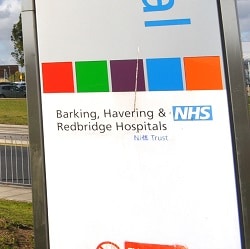 Trust: Suspension was not a proportionate response

An in-house solicitor has won an injunction allowing her to return to work at an NHS trust after a judge found it “strongly arguable” that she had been unreasonably suspended.

It was similarly arguable that the manner in which Caroline Harrison was treated by Barking, Havering and Redbridge University Hospitals NHS Trust amounted to a breach of the implied duty of trust and confidence, said Margaret Obi, sitting as a deputy High Court judge.

Ms Harrison is the trust’s deputy head of legal services and since qualifying in 1992 has spent her entire legal career advising NHS bodies or doctors. The split of her work was 60% inquest work, 35% claims work and 5% advisory work and legal teaching.

In May 2019, Mr Avery, the trust’s director of nursing, asked her to carry out an internal staff investigation. Ms Harrison, having discussed the request with the head of legal services – who is also currently suspended – concluded that it would be inappropriate for her to do so for various reasons, including that she was not sufficiently independent and the role might impair her ability to advise the trust in relation to the process.

Mr Avery did not reply to these concerns but instead instigated disciplinary proceedings which led to Ms Harrison receiving a verbal warning. This was issued due to her failing to undertake the investigation and also for Mr Avery hearing her tell a panel law firm that “my daughter could do a better job”.

The judge recorded: “Mr Avery had become increasingly concerned, in the first half of 2019, that the claimant and her line manager were refusing to engage constructively with him and that the behaviours of the team and conduct of their cases posed a risk to the trust.

“Therefore, he arranged for a senior lawyer from Capsticks to carry out an initial review of a large number of the trust files and interview members of the team about how they managed the claims.”

One example of the latter was the way Ms Harrison had handled a clinical negligence case after the trust had lost at trial (the NR case).

The day after the trust received this report, 2 August, Ms Harrison was suspended due to concerns over her handling of the NR case.

A week later, Ms Harrison was diagnosed with stress and prescribed anti-depressant medication; she had not previously suffered from mental health problems.

On 12 November, Mr Avery said she could return to work on restricted duties in a phased return. He instructed her to audit files with a view to improving the trust’s learning on consent, but this could not be carried out in the legal office.

Ms Harrison refused to do this on the basis that it amounted to a demotion and was contrary to medical advice that returning to work would improve her health. She was suspended again for refusing to comply with a management instruction.

She had wanted to return to her normal duties but had voluntarily offered not to conduct any clinical negligence cases.

In a witness statement, the solicitor explained how her health has suffered as a result of the suspension and “being prevented from performing the job I love”.

She said: “I have found the fact that I have been suspended (for the first time in my professional life) humiliating and distressing. I have become tearful, I am not sleeping or eating properly, and I am having panic attacks when I think about not being able to return to the work I love…

Judge Obi stressed that, at this stage, she was only deciding whether Ms Harrison had established an arguable case.

She agreed that it was strongly arguable the two decisions to suspend Ms Harrison were unreasonable, meaning there was no proper justification for preventing her from returning to her normal duties, save for clinical negligence work.

The judge found that the main issue was her handling of the NR case and the suspension was not a proportionate response.

“In the context of the claimant’s undisputed professional integrity and an independent review of her caseload, the concerns raised, even if well-founded, were insufficient, individually or cumulatively, to justify total exclusion in the form of suspension from all normal duties.”

The trust’s actions meant it was also strongly arguable that there was a breach of the implied duty of trust and confidence – criticisms of Ms Harrison’s inquest and medico-legal work, purporting to justify a restriction of her duties, were made after the decision to suspend, Judge Obi noted.

“There was also no challenge to the claimant’s assertion that the allegation that she is rude and unprofessional to panel solicitors had not been raised with her during her appraisals. Therefore, restriction of the claimant’s ability to undertake inquest and medico-legal work without supervision is not justified.”

The judge said the balance of convenience “overwhelmingly favours” the grant of an injunction: “The evidence does not indicate that harm would be caused to the defendant in permitting the claimant to resume her inquest and medico-legal work.

“However, there is clear evidence that excluding the claimant from her place of work has caused significant personal upset and is professionally to her detriment.

“Furthermore, there is clear evidence that permitting the claimant to return to her normal duties would enable her to regain her health.”