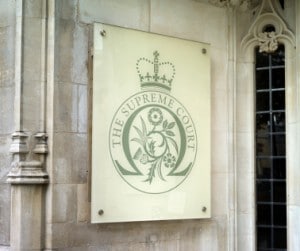 Lord Toulson: An award reflecting “neither loss caused not profit gained” would be penal

The Supreme Court has backed a law firm’s arguments that, following a breach of trust, it should have to pay in damages only the amount which the lender involved would have lost if the breach had not occurred.

AIB Bank (UK) plc claimed that Mark Redler & Co should pay £2.5m in damages, excluding interest – the full amount of its loan less the amount actually recovered from the sale of the property involved.

Giving the leading judgment at the Supreme Court, Lord Toulson said the law firm argued that its liability should be limited to the extent of the loss “by comparison with its position if the solicitors had done as they should”, which amounted to around £274,000 plus interest.

Lord Toulson said: “Placing the beneficiary in the same position as he would have been in but for the breach may involve restoring the value of something lost by the breach or making good financial damage caused by the breach.

“But a monetary award which reflected neither loss caused nor profit gained by the wrongdoer would be penal.”

The property was already subject to a first legal charge in favour of Barclays Bank, which secured borrowings on two different accounts amounting to around £1.5m.

“The solicitors were given a redemption figure for one of the two Barclays accounts which they mistakenly took to be the total figure,” Lord Toulson said. “They were at fault because they should have realised from the information supplied by Barclays that the figure related only to one account.”

Lord Toulson said the law firm paid Barclays the figure which they “wrongly believed” was the total necessary to redeem the mortgage and remitted the balance of the £3.3m less expenses to the borrowers.

The property was later sold by Barclays, following a repossession, for £1.2m, of which AIB received around £868,000. Lord Toulson said that if the firm had paid Barclays the full amount required to redeem the mortgage, AIB would have had security for “an extra £300,000 or thereabouts of its loan”.

He concluded: “Equitable compensation and common law damages are remedies based on separate legal obligations. What has to be identified in each case is the content of any relevant obligation and the consequences of its breach.