Superheroes bid to save nation from legal ignorance 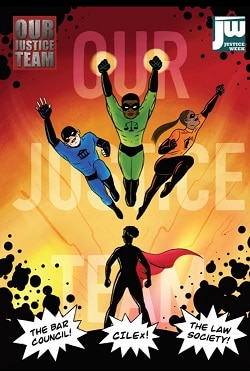 The legal superheroes looking to smash barriers to justice

The public shares a widespread concern that their rights are being eroded and that they need to know more about the law, according to research by the main three lawyer groups published today to mark Justice Week.

People were particularly concerned about attacks of freedom of speech and expression.

The Bar Council, Law Society and Chartered Institute of Legal Executives (CILEx) commissioned Populus to poll 4,182 people and alongside it have launched a campaign features a team of ‘superheroes’ – The Justice Team – to highlight to younger people in particular the vital role of justice and the rule of law in supporting democracy.

The survey found that fewer than one in five people aged 18-24 felt democracy was strengthening at the moment, while a third worried about having less freedom. Among over 55s, this concern rose to 40%.

Many people of all ages feared the environment was inadequately protected, while more than eight out of ten cited a need for environmental protection laws.

A similar proportion said that generally it was “very important for ordinary people to understand how the law works” and agreed that the role of law in protecting freedom was important.

The regulators have produced an animated video featuring the superheroes. This is the second such national event; the first was in November 2018.

Bar Council chair Amanda Pinto QC said: “As this survey shows, young people clearly have an appetite for greater knowledge about how the law can help everyone play their part in society. Justice Week 2020 is about encouraging that awareness.”

Law Society president Simon Davis said: “It is important to educate everyone including young people about how the law works and about their rights. Without that, our very notion of British justice is likely to come under pressure.

“Our survey… showed that the public appreciate the need to know how the law works, and as part of this we want to enlist the help of schools to further educate children. Very often members of the public struggle even to identify a problem as a legal issue, so are not inclined to seek specialist advice.

“To help broaden everyone’s knowledge of the law, we are including a drive for teachers to bring teaching of the law more into schools for our special week.”

CILEx chair Professor Chris Bones added: “At a time when many people are voicing concerns about how we hold the powerful to account for their actions in a democratic society, it is more important than ever that members of the public understand how the law works to ensure that everyone plays by the rules.

“Young people in particular want companies, public services and the state to fulfil their obligations, particularly in respect of the climate emergency.

“If they are to remain confident in democracy as the best way to govern a modern society, then it is important to ensure that they have a good grasp of their rights and how to exercise them.”

A list of events taking place during Justice Week can be found here.