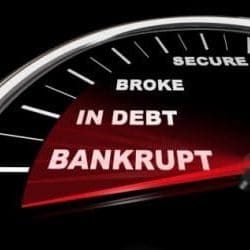 Bankruptcy: Restrictions usually in place only for a year

A struck-off solicitor made bankrupt by the Solicitors Regulation Authority (SRA) because he owes it nearly £150,000 has agreed to a further nine years of bankruptcy restrictions.

They mean he cannot borrow more than £500 without disclosing his bankrupt status, and cannot act as a company director without the court’s permission.

John Richard Killington, 63, of Brighton, was struck off in 2017 for his conduct as a sole practitioner at Watford law firm Brown & Emery. The SRA shut down the firm earlier that year.

The tribunal found that Mr Killington made unsecured loans of more than £370,000 from funds the firm was holding on trust for the beneficiaries of an estate, to two other unrelated clients to complete their property purchases.

It said he did this to avoid possible negligence claims, having failed to arrange the receipt of mortgage funds in time for completion.

This meant that six charities were deprived of the money due from the estate for longer than anticipated, and Mr Killington was also said to have delayed the sale of shares, which had halved in value by the time he disposed of them.

He was also assessed to owe almost £150,000 in costs associated with his investigation, including £34,000 ordered by the tribunal and the cost of the intervention.

The SRA petitioned for his bankruptcy when he was unable to pay and a bankruptcy order was granted in August 2018. Bankruptcy restrictions are usually lifted after a year but, owing to the seriousness of Mr Killington’s abuse of trust, the Official Receiver pursued extended restrictions.

Liesl Cook, Official Receiver for the Insolvency Service, said: “John Killington abused the trust placed in him by a client who had every right to expect he would faithfully carry out his duties as their solicitor.

“He has now paid a heavy price for his misconduct as, in addition to not being able practice law, severe bankruptcy restrictions have been placed on him thanks to the collaboration between the SRA and the Insolvency Service.”