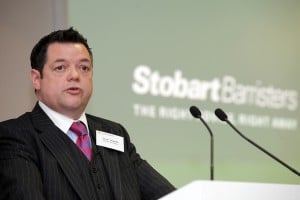 Innovative players in legal services have revealed ambitious plans for the future, building on strategies that have seen them develop rapidly in a fast-changing market.

Stobart Barristers, Riverview Law and MyHomeMove – all major success stories to date in the emerging post-Legal Services Act landscape – unveiled fresh details about their business models at the Legal Futures conference, sponsored by NatWest, on Monday.

Trevor Howarth, group legal director of Stobart Group, in his first public address on his work, revealed that more than 4,000 barristers had flocked to the Stobart brand and applied to be part of its direct access scheme – a figure equal to nearly a third of all of the country’s 12,500 self-employed barristers.

He said his initial concern when the truck company launched Stobart Barristers in May was that too few barristers would be interested but its panel quickly reached 1,200. “We’ve actually been inundated, without exaggeration, from barristers’ chambers the length and breadth of the country. [Barristers] will physically come into the office, actually demand to come and see us.”

Mr Howarth said it was now possible under his scheme for potential clients to receive free initial telephone advice from a QC. “Five years ago if you were to ask a QC if he would speak to a client free of charge, he would laugh at you,” he observed.

Doug Crawford, chief executive of MyHomeMove – whose conveyancing arm Premier Property Lawyers became the first ever alternative business structure in October 2011 – told the conference that he expected to treble the size of the business by 2016 and double its staff numbers from 422 to more than 800.

He disclosed that MyHomeMove is in talks with a number of law firms about the company delivering conveyancing on a ‘white label’ basis, leaving it to the firms to manage client relationships under their own brand.

Riverview’s chief executive, Karl Chapman, confirmed the combined law firm and barristers’ chambers, which sells fixed-fee advice to businesses, is in the process of acquiring a law firm – and further that the company plans to freeze its expansion strategy by joining forces with just one firm.

Mr Chapman, who first revealed the plan to acquire at the last Legal Futures conference, said: “What you will hopefully see us do is bring a law firm alongside us to get the benefits of what exists within the law firm and… make a very strong marriage – and then to say no more law firm acquisitions.

“We are so confident about the business model given the last eight months, about the demand that exists there, why would we want to put another law firm on top of it? You just focus on growing a platform that you’ve got organically and end up driving for customers and for talent.”

Part of his optimism for the success of Riverview relied on his finding that general counsel and heads of legal “stunningly, are trying to build the size of their in-house function” as a result of dissatisfaction with the legal services supply chain, in particular at pricing structures and the quality of customer service. This state of affairs represents “an opportunity and a half” for legal business to present alternatives to general counsel, he concluded.

Mr Chapman revealed Riverview’s focus on attracting international business was “a massive growth area”. The practice, which in May opened a New York office, is focused on providing international organisations with “seamless, fixed-price access into the English courts when they need it”.

He also predicted management information and access to data would become a “massive change point” in the legal marketplace in the next five to 10 years, because of its “dramatic power” to transform businesses in terms of analysing trends, saving future costs and so forth. It is a “big part of our investment”, he said.

Mr Crawford said MyHomeMove’s growth plan to treble the business over four years was based on it having achieved similar growth in the past four years. By the end of this year it will have done “just short of 30,000 completions”, which is approximately a 3% market share, equal to almost one in 20 of the UK’s total transactions.

“We are aiming for a 10% market share by 2016 and we will do that on the back of customer service, continued innovation and leveraging the significant investments that we’re currently making in the business.”

The company was in the process of recruiting a further 400 case handlers – including licensed conveyancers – to match the expansion. “Success tomorrow is all about investment today,” he said.