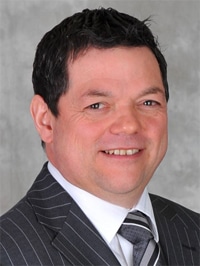 The Stobart Group – which yesterday made the surprise announcement of its intention to enter legal services – will today begin advertising its barrister-led offering, which aims to cut out the “waste” of instructing a solicitor separately.

A video on Stobart Barristers’ website – fronted by The Bill actor Mark Wingett – tells users that they have nothing to lose by calling the company, “except your solicitor’s bill”. Its helpline is open from 8am to 10pm, seven days a week.

Trevor Howarth, the group’s non-lawyer legal director and head of Stobart Barristers, told Legal Futures that just under 1,000 QCs and junior counsel from around the country are involved, supported by a 20-strong paralegal team based in Manchester, which he is set to expand.

The aim is to generate £10m in fees over the first three years; Stobart Barristers will act as an intermediary and receive its part of the fee from the client, thereby avoiding any problems with barristers paying referral fees. The fixed fees are bespoke, rather than menu based.

The service covers a broad range of largely, but not exclusively, contentious areas of both personal and business advice, including criminal and family law, and disputing solicitors’ bills. Mr Howarth said they are steering away from work that requires the involvement of a solicitor, such as to hold client money, meaning that it is not doing conveyancing, for example.

He argued that on many occasions a solicitor seeks the advice of counsel anyway – meaning that he was cutting out the middle man – and that this model means “the barrister knows what he needs from the outset”.

While Mr Howarth acknowledged that this does not usually happen in some of the areas Stobart Barristers is covering, such as probate, he said that “because of diminishing legal aid and solicitors holding onto more [advocacy in-house], more barristers are readily available” to do such work. The pilot it has been running in recent months has seen more junior barristers used to handle preparatory work before handing on to a QC.

He said he was one of the first to take advantage of direct access to the Bar when it was introduced in 2004, and said there was a “large appetite” at the Bar for it. He predicted that external investment in law firms would actually drive hourly rates up because of the return that investors would want to see.

The Stobart Group, which currently has five logistical divisions, yesterday announced a 10% rise in revenues for 2011/12 to £552m, with profits up slightly to £31m.