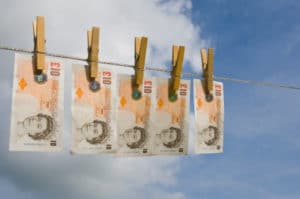 More than one in ten law firms assessed for compliance with government money laundering obligations brought in last year have been referred for disciplinary action, a proportion which if extrapolated to the wider profession would amount to over 1,200 firms.

So concerned was the Solicitors Regulation Authority (SRA) about the profession’s anti-money laundering (AML) performance that last week it issued a public warning notice, after scrutiny of 50 firms led to six being earmarked for the disciplinary process.

The thematic review involved investigating the AML efforts of 25 large and 25 smaller practices, including two sole practitioners, in light of the Money Laundering Regulations 2017 (MLR 2017), which came into force in June.

The six were found to have “a significant amount of work to do to improve both processes and practice”.

The SRA said it was especially “disappointed” that only 11 of the 50 visited firms had conducted a firm-wide risk assessment, and just six further firms were in the process of doing one.

Such an assessment is a requirement under the MLR 2017, which applies to nearly 7,000 law firms providing services targeted by money launderers.

The regulator said: “Firms must take urgent steps to comply.”

However, the SRA acknowledged that its review was undertaken soon after the regulations came into force, concluding: “Overall, most firms we visited are taking appropriate steps to understand and reduce the risk of money laundering, and to comply with the new regulations.”

It added: “We were also encouraged that some firms are going beyond the minimum requirements.”

But “areas of concern” included the failure of some firms to keep AML-related records.

It advised: “Any weakness in a firm’s systems or processes could have significant consequences.”

The SRA was satisfied that most firms understood that they had to investigate the source and origin of client funds. Some said that such checks, though onerous, “could be turned into a positive marketing opportunity to cross-market other services that the firm could offer”.

The warning notice said solicitors should “remain vigilant and look out for signs such as overly secretive clients, high-value cash transactions and clients acting through third parties. Firms should report suspicious activity”.

The SRA also produced guidance for solicitors on the MLR 2017, which highlighted requirements such as the need for an AML compliance officer to sit on boards of directors, and to identify politically exposed persons.

The SRA said that, in the last three years, it had closed down eight firms in connection with potential money laundering, with another 14 doing so voluntarily. It had also referred 49 solicitors and two other firms to the Solicitors Disciplinary Tribunal, leading to 12 strike-offs.

Paul Philip, the SRA’s chief executive, said: “The credibility of law firms makes them an obvious target for criminals wishing to launder money. Tackling it is crucial not only to maintain trust in the profession, but also for the good of society.

“Money laundering is not a victimless crime – it helps fund terrorism and those involved in drug trafficking and people smuggling.

“We are encouraged that most firms seem to be on top of the issues, but all firms in scope must now comply with the new regulations. It is not enough to want to do the right thing.

“Weak processes or undertrained staff leave the door open for criminals. If firms do not step up and treat this issue with the seriousness it deserves, we will take action.”