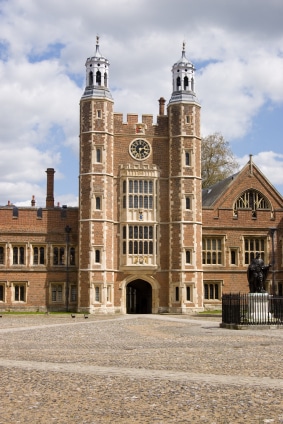 Eton College: debate over private education and access to the law

The inaugural diversity survey of people working in solicitors’ firms has found that more than a quarter of lawyers went to fee-paying schools – nearly four times the national average.

The Solicitors Regulation Authority (SRA) survey, conducted in autumn 2012, was the first of what is now an annual requirement as laid down by the Legal Services Board. Firms will in future be required to conduct the survey themselves and publish the results.

Some 9,408 firms took part and the results showed that a total of 221,845 people worked at them; 42% of individuals filled in personal questionnaires. ‘Lawyer’ covers all eight recognised branches of the legal profession.

Around 7% of the general population attended independent fee-paying schools, and the fact that 26% of lawyers did will only fuel the debate about diversity in and access to the law. The figure for independently educated non-lawyers was 8%.

Nearly half (49%) of lawyers who went to university were the first in their family to do so.

The SRA also conducted a thematic review of compliance with principle 9 of its code of conduct – “encouraging equality of opportunity and respect for diversity”. This involved visits to 90 firms and revealed that in some cases clients were pushing the diversity agenda.

The report, going to today’s SRA board meeting, said: “Apart from the regulatory and legal imperatives, firms were driven by a range of factors – the desire to recruit and retain the best staff, to ensure that individual clients were well served, or to market their services and attract new business.

“In several cases it was the clients themselves who were driving the firms to promote equality and diversity.”

One large firm showed that clients could be a driver for adopting and promoting good diversity practices by demanding the firm report equality data on a quarterly basis. Another firm was required to adhere to a ‘zero tolerance’ approach by its public sector client base.

Amongst its general findings were that larger firms tended to have established policies in place, whereas smaller firms and sole practitioners dealt with issues as and when they arose.

Firms of all sizes which had drafted their own policies, found these worked better than standard procedures, and encouraged a proactive approach to diversity.

Challenges faced by some of the firms visited included a frustration at a lack of staff engagement and a concern about the time spent on formulating and communicating policies, and keeping up with legislation, eating into fee-earner time.

However, one challenge remains around firms understanding the diversity of their client base.

“It was therefore difficult for firms to know if they were reaching all sectors of the local community. This was a particular challenge for high street firms but less so for the more commercial practices.”

The report concluded that four key actions had emerged from the process – that firms needed help in understanding the LSB’s expectations; that guidance on the new workforce diversity data arrangement needs to be publicised; that incidents of discrimination reported to the authorities will be monitored; and that firms need to be more proactive in their equality and diversity approach.

It said: “Compliance with principle 9 requires more than an equality and diversity policy and no proven complaints of discrimination. The SRA won’t be prescriptive but firms will be expected to have a clear strategy for managing the risks in this area and should monitor its progress and set targets for improvement.

“The approach need not be complex, nor overambitious as long as there is some demonstrable evidence that a firm has identified how they are going to achieve compliance with Principle 9 and is implementing that plan in a proportionate way.”