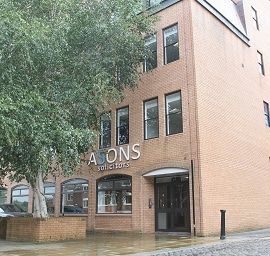 Asons: no longer the tenant of this building

The Solicitors Regulation Authority (SRA) has closed down controversial Bolton law firm Asons shortly after it ceased trading and was sold to another practice, it emerged yesterday.

However, the regulator has made clear to Coops Law – the new name of alternative business structure (ABS) Banks Solicitors – that the staff who moved over from Asons cannot work on any of their old cases, all of which are now in the possession of the SRA.

The SRA also intervened in the practice of Kamran Akram, Asons’ principal and one of five brothers involved in the firm, which means his practising certificate is now suspended.

Both interventions were on the general ground that they were necessary to protect the interests of clients and former clients, so the actual cause is not clear.

While Asons has been in the news for a £300,000 grant from Bolton Council – which Mr Akram had to repay this week because the firm had closed – more serious was the revelation last month that it had agreed to repay more than £100,000 to insurer AXA after admitting to falsely and systematically inflating legal costs. The SRA said at the time that it was investigating this.

Banks Solicitors was licensed as an ABS last August, with non-solicitor Irfan Akram its head of finance and administration. Last Friday, it changed its registered office to that of Asons, and, on Tuesday this week, its name to Coops Law.

On Wednesday, Munir Majid, who was an assistant solicitor at Asons, became a director of Coops, alongside Irfan Akram and head of legal practice Hasib Khan.

All Asons staff were transferred over to Coops, which it hailed as a “fresh start”.

This week also saw the publication of Asons’ annual results, for the year to 31 May 2016, and, unusually, accounts for the following six months.

However, the accounts for the six months to 30 November 2016 painted a different picture. Although turnover of £4.3m was down 25% pro rata on the previous year – perhaps unsurprising given that staff numbers had fallen to 134 – Asons achieved a profit of £808,000.

Mr Akmal’s loan had increased to £2.87m, although the accounts said that it was not repayable on demand and there was no fixed date for repayment. The ‘failed cases costs provision’ was reduced to £743,000.

These accounts also referred to the council grant and said the funds had to be applied to “qualifying development costs”.

They did not specify the particular use, but said the funds related to assets purchased “with expected useful economic life of five years”, meaning they were to be released across that period in line with financial reporting standards.

Just £10,000 was released to the profit and loss for the half-year period, with a further £60,000 due to be released in the following six months.