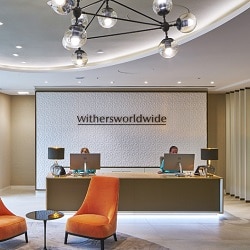 This was particularly important given the nature of the work the well-known private client practice undertakes and its client base, according to a regulatory settlement agreement between the two published yesterday.

The agreement means Withers will not be referred to a disciplinary tribunal.

Under regulation 24(1)(a)(ii) of the 2017 Money Laundering Regulations (MLRs) – which came into force on 26 June 2017 – law firms are required to ensure that “relevant employees” are regularly given training in how to recognise and deal with transactions and other activities or situations which may be related to money laundering or terrorist financing.

According to the agreement, between June 2017 and October 2019, Withers failed to do this.

The SRA first asked the firm in November 2018 whether it had complied with the requirement, and by the end of 2018, Withers said it had trained approximately two-thirds of the “relevant employees”. The rest received the training by early October 2019.

After the SRA began disciplinary proceedings, Withers admitted that the delivery of the training had taken longer than anticipated.

The agreement said: “Assurances have been given by the firm, which the SRA accepts, that training has now been completed for all relevant employees on the MLRs 2017.”

The firm accepted that it failed to comply with its legal obligations under regulation 24(1)(a)(ii) and that this breached two of the old SRA principles and two outcomes.

The SRA said a rebuke was “appropriate and proportionate” because there was a breach of statutory obligations which, once highlighted to the firm in November 2018, “was not remedied in a timely fashion”.

The agreed outcome also created “a credible deterrent to other firms and the issuing of such a sanction signifies the risk to the public, and the legal sector, that arises when employees of a firm may not be adequately trained to detect and prevent money laundering and terrorist financing”.

The SRA added: “There has been no evidence of lasting harm to consumers or third parties, the breach has been remedied and there is a low risk of repetition.”

In mitigation, Withers made early admissions and said that, notwithstanding the absence of regular training, it did take “some other steps” to make relevant employees aware of the legislation.