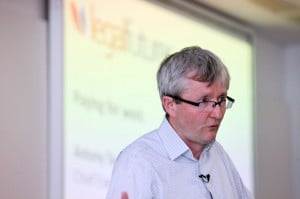 A significant number of businesses involved in the personal injury market have been acting in breach of the referral fee ban since it came in on 1 April, the chief executive of the Solicitors Regulation Authority (SRA) warned yesterday.

Speaking at the Legal Futures Conference in London, sponsored by NatWest, Antony Townsend said the authority was concerned to ensure that the operation of the market should be balanced against the “preservation of the professional principles” – including putting clients’ interests first.

He acknowledged that “quite a number” of arrangements investigated by the SRA in the nine weeks since the ban came into force had “been on the wrong side of the line”.

But it made sense for economic and public interest reasons to seek “constructive engagement” with law firms and claims management companies “to bring people into compliance as quickly as we can”.

But he warned: “We do have an enforcement strategy. The fact we haven’t yet had any cases going to the Solicitors Disciplinary Tribunal doesn’t mean that there won’t be any.”

Speaking at the same session, Law Society chief executive Des Hudson said that having initially opposed the Law Society council’s position in favour of a ban on all referral fees, he had since developed sympathy for it.

However, he predicted that the ban in the Legal Aid, Sentencing and Punishment of Offenders Act 2012 would prove “ineffective”.

Mr Hudson said that client origination is being wrested from solicitors by insurance companies, claims managers, and in conveyancing by a small number of businesses, to the detriment of clients.

While law firms had to adopt new attitudes to client service and innovate, he now believed the way the market in legal services was being regulated “is not in the long-term interests of anybody”. The unique selling point of the solicitors’ profession was “putting the client’s interest before our interest”.

He claimed that regulation of the financial industry in England and Wales was “a laughing stock across the world” and said the failure to regulate banks held lessons for the legal market.

In conveyancing, “a very large and growing proportion of the residential housing market is controlled by a very small number of businesses”, said Mr Hudson. They operated “at a very early point of the logistics chain” in terms of client origination, which was problematic for law firms that were then tied into a referral relationship.

On a similar theme, Tom Curran, chief executive of King’s Court Trust, the leading probate provider that last year submitted itself [2] to regulation by the Council for Licensed Conveyancers, told the conference that law firms would see a dwindling of probate work as funeral homes increasingly intercepted and retained clients in-house.

Mr Hudson argued that conveyancing clients’ interests were at risk of being put second to obligations placed on law firms, such as to buy searches that were more costly or more extensive than the client needed, or underpinned by inappropriate insurance. “Is that in the clients’ interests?” he asked.

He said he was conscious of the “enormous pressure” on personal injury and conveyancing solicitors to originate clients, adding: “The insurance companies and the claims management companies are taking, insidiously, control of client origination. They are reducing choice, they will drive price and profitability higher.

“I am not sure that simply allowing the market to operate in that way is in the consumer’s or the country’s interest.”

But he saw “no prospect any time soon” of the government extending the referral fee ban beyond personal injury work.

Jeff Winn, managing director of leading accident claims firm Winn Solicitors, told the conference that he believed the legislation banning personal injury referrals allowed arrangements that did not involve the transfer of data that would identify clients.

He explained: “Our approach has been to avoid the transfer of details. That may mean referral sources will give your details to somebody and the client ‘phones up. As I understand it, that’s OK. So those sorts of contacts where it’s made directly by the client, where they have an option to ring or not ring, that’s OK and compliant [with the ban].”

Mr Hudson, however, said that on his reading of the legislation, such arrangements could still fall foul of the ban.