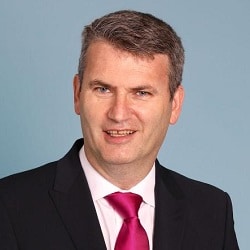 The Jewish solicitor fined for posting offensive messages on social media in response to alleged neo-Nazi trolls has accused the Solicitors Regulation Authority (SRA) of being “on the wrong side of history”.

Renowned media lawyer Mark Lewis was fined £2,500 by the Solicitors Disciplinary Tribunal after it upheld an allegation that, over an 18-month period, “he used his Twitter account which publicly identified him as a solicitor to publicly post offensive and profane communications”.

Mr Lewis said in a statement: “The SRA was faced with a choice between Holocaust denying neo-Nazis and a Jewish lawyer. It chose to side with the neo-Nazis.

“It is on the wrong side of history. It is the Holocaust revisionists who are celebrating the verdict. That tells you all that you need to know.”

An SRA spokesman declined to respond to his comments.

Mr Lewis was open about his approach of responding aggressively to threatening tweets. One he sent said: “Happy to celebrate your death too. I have not got time for your hideous evil.”

The full tribunal ruling has not yet been published, but concerns were expressed during the hearing that the SRA had not seen all of the tweets to which Mr Lewis was responding.

Nonetheless, in a sign of the sensitivity of the case, the SRA’s notice of prosecution [1] included an unprecedented addendum, making it clear that “it does not condone the actions of any individuals involved in exchanges with Mr Lewis on Twitter”.

There was criticism of the decision on Twitter too. Leading family law solicitor Marilyn Stowe wrote: “@sra_solicitors 100% wrong. There is obviously a distinction between the foulest abuse and responding in terms they understand to it. Shameful – you’ve given legitimacy to the foulest Anti Semites.”

Simon Myerson QC said: “I don’t post specifically as a Jew very often. But @sra_solicitors is covered in shame tonight. They picked on a Jew subject to racist abuse. They punished him as a solicitor for responding to death threats. Being a Jew first isn’t acceptable, apparently. Truly contemptible.”

The broadcaster Jonny Gould tweeted: “I witnessed @MLewisLawyer punished by @sra_solicitors today for defending himself online against convicted neo-Nazis. A severe miscarriage of justice. The SRA should be grateful of any appeal lodged not least so they can restore their considerably tarnished reputation over this.”

Former Labour councillor Adam Langleben tweeted: “@MLewisLawyer was there for me when I needed legal advice fighting racists so I’m there for him now that he has been targeted by them. Donate and help raise £12500.”

The group Labour Against Anti-Semitism tweeted: “Mark Lewis has worked tirelessly to fight antisemitism; now he is being penalised for standing up to neo-Nazis on social media. We are proud to fight alongside him and support him. Please #donate on @justgiving and RT.”

A separate crowdfunding campaign to help Mr Lewis and his wife when they shortly move to Israel has so far raised £1,638.

But not all tweets were supportive. The group Left Labour Voice said: “Well done to @sra_solicitors who correctly fined lawyer Mark Lewis for his ongoing social media conduct. Not befitting of a lawman. Racist bile like this is not acceptable.”