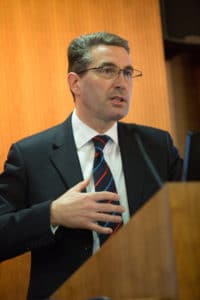 Philip: Still some way to go

This was particularly because large corporate firms account for nearly 70% of partners in England and Wales, where women do not hold senior positions in numbers proportionate to their representation within the wider profession.

High street firms, by contrast, offered BAME males, white females and BAME females “the greatest opportunities to become a partner and an almost equal chance of doing so”.

The research, carried out by Leeds University and Newcastle University Business School, analysed data for more than 194,000 solicitors between 1970 and 2016 who were still on the roll after 2006.

During that time, the proportion of women and BAME people entering the profession has risen significantly. Only around 10% of entrants were female in 1970, compared to 60% in 2016. Around half of all solicitors are now female.

There has also been a large increase in the proportion of BAME solicitors over the last three decades: from 0.25% in 1982 to 16% now.

Yet partnership remains male dominated, with only a third of partners female. At the same time, the share of BAME males becoming a partner, especially those of Asian origin, has increased significantly.

“The best opportunities for females of all ethnicities to become a partner were in a small firm, as is the case for BAME males.”

The research also found an increasing trend of solicitors leaving private practice to work in-house, a move which was “more pronounced amongst women and white women in particular”.

The SRA has also published a thematic review of equality, diversity and inclusion (EDI) issues, which involved more than 40 groups and law firms and suggested that “achieving a diverse workforce does not have to be complicated and often only really requires an open-minded commitment to diversity”.

It highlighted the importance of role models and mentors for some BAME women in particular, and of reviewing all policies from an EDI perspective to strip out any diversity bias.

This included encouraging partners to take paternity leave, and making sure EDI issues are prioritised at the top, for instance by senior management or their CEO chairing its diversity committee.

“Challenges that can hold back progress include a perception that flexible working could compromise good client service, flat firm structures making career progression difficult and not addressing issues of unconscious bias in selection processes.”

The research profiled the make-up of five “statistically different types of law firms”, finding that high street practices, for example, employed a large proportion of staff who were first-generation graduates, practitioners from a white background, and slightly more males than females.

By contrast, large corporate firms “will typically include a high representation of staff with characteristics of social advantage as evidenced by the proportions who attended a fee-paying school and have a family history of attending higher education. Relatedly, the representation of male practitioners and those of white origin is high”.

SRA chief executive Paul Philip said: “This independent research shows that although progress has been made, the sector still has some way to go.

“This is not about ticking boxes. Diverse, inclusive law firms benefit everybody. They can attract and retain the best people, regardless of background. If firms reflect the communities they serve, it may also help improve access to legal services.

“Our thematic review shows that firms are trying different ways of increasing diversity. It is clear that a willingness to change and simple steps can make a big difference.”