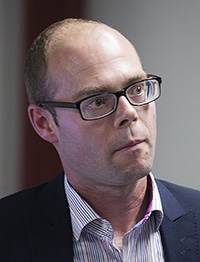 Livesley: firms will need to use their judgement

The Solicitors Regulation Authority (SRA) will not introduce specific rules to deal with the upcoming legislative ban on personal injury (PI) law firms paying inducements to claim, but has pledged to take “strong enforcement action” if firms breach it.

It also emerged at yesterday’s PI Futures conference in Manchester that it has only two ongoing formal investigations into breaches of the referral fee ban.

Tim Livesley, the SRA’s chief economist, told the 200 delegates that the regulator had learned lessons from last year’s referral fee ban, including that the core code of conduct principles were “more important” than the specific outcomes it introduced.

This meant no new outcomes were going to be drafted to deal with the inducements ban currently going through Parliament in the Criminal Justice and Courts Bill.

He cited five principles that were relevant: the requirements to uphold the rule of law/administration of justice, to act with integrity, to act in the best interests of each client, to maintain public trust, and to comply with legal obligations.

Ultimately, Mr Livesley emphasised, “firms will need to use their judgement” on whether they are complying with the ban, and the SRA will “take strong enforcement action when there is evidence principles are breached”.

On the referral fee ban, Mr Livesley said all the evidence was that “firms are interpreting it pretty well”, with just the two firms subject to formal investigations. No decisions have yet been made on whether they will face enforcement action.

On other issues in the personal injury market, the SRA is to look at the “perceived risks” associated with law firm ownership of medical reporting agencies. The Ministry of Justice is currently planning to ban law firms from using their own agencies for their own cases.

Mr Livesley, who also manages the SRA’s risk analysis team, said others risks to PI consumers include firms under commercial pressure moving into areas where they are not competent – leading to under-settlements – and poor information to consumers being advised under conditional fee agreements about what they might have to pay if the case is dropped.