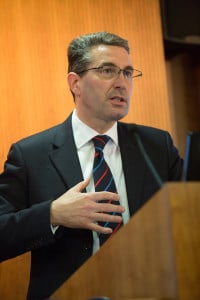 Philip: “there may be a slight hiatus”

Paul Philip, chief executive of the Solicitors Regulation Authority (SRA), has announced a rethink on plans to abolish the minimum period of workplace training required by all future solicitors.

Launching plans for the Solicitors Qualifying Examination (SQE) in December, the regulator argued that workplace training could be assessed by outcomes rather than a period time.

“Maintaining high professional standards is absolutely paramount. We’re not going to just plough on with our educational reforms unless we feel it is the right thing to do.”

Mr Philip said the SRA’s consultation on training reforms had been a success in generating 261 responses, but they had been “mixed” and tended to favour the status quo.

The City of London Law Society argued particularly strongly that the reputation of solicitors could be damaged by the reforms.

“We will pause and consider all the consultation responses, to make sure people feel they’ve been heard,” Mr Philip said. “There may be a slight hiatus while we do that.

“We feel it is right to make clear that workplace assessment will continue to be part of the model. High professional standards are what we’re all about.”

Mr Philip stressed that the assessment of candidates’ skills by the SQE would be “at least at degree level”, and the SRA would consult again on its plans later in the year.

“The solicitor’s brand is really important. It’s the number one brand in the High Street for consumers and we would like to keep it that away.”

Many of the strongest critics of the reforms were law schools, and Mr Philip said it was important to “re-engage with educationalists” and ensure they were as content as possible.

Speaking to journalists afterwards, Mr Philip said the regulator might decide to keep the existing minimum period of workplace training at two years, but the issue would be determined by the SRA board.

He said the second consultation would “make assumptions” on this issue and others, and include more detail.

In a separate development, the SRA yesterday launched ‘Law Firm Search’, a new searchable, online database of the law firms it regulates.

Mr Philip said the service would begin by providing basic data, but could add information at a later stage on disciplinary findings.

Answering a question as to whether Law Firm Search was a rival to the Law Society’s Find a Solicitor service, Mr Philip said the society provided a “much more comprehensive data set”.

Ownership of the roll of solicitors was a major bone of contention when the SRA was created a decade ago, and is likely to be again when the government consultation on regulatory independence is published. As well as being a public resource, the Law Society monetises the roll through selling solicitors’ data to third parties.