SRA and Law Society at loggerheads again over independent regulation 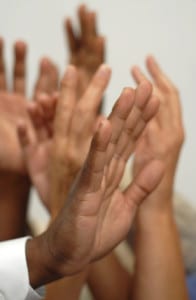 Hands up if you support independent regulation of solicitors

The general public strongly supports the notion of full separation of legal regulators from professional bodies, according to the results of an opinion poll commissioned by the Solicitors Regulation Authority (SRA).

The Law Society hit back by appearing to suggest an SRA stripped of its power to set solicitors’ standards should be merged with other legal regulators.

The survey raised still further the temperature of the row over independence between the regulator and the Law Society which erupted last month in the wake of an interview this website conducted with the latter’s chief executive.

In essence, the SRA wants to continue its present role but with structural independence from Chancery Lane, while the Law Society says it should control professional standards and entry to the profession, with an independent SRA just responsible for enforcement.

Pollster ComRes quizzed 1,810 adults, of whom 86% believed that solicitors should be regulated – more than said the same for doctors, dentists or accountants – while 82% said this should be carried out independently of their representative body.

Two-thirds said they were more likely to trust a profession that was independently regulated – while 75% said they generally preferred independent regulation of professionals to self-regulation – and 69% would feel more comfortable about making a complaint in such circumstances.

Asked directly about the government’s plan to make the SRA fully independent – as outlined by Chancellor George Osborne in the Autumn Statement – 77% said they supported it.

SRA chief executive Paul Philip said: “This research shows that the public overwhelmingly support independent regulation. Public confidence is key and, as this polling shows, people say they will have greater trust in their solicitor if they know they are independently regulated.

“I am clear that separating out regulator and representative body would not only meet public expectations, but would enhance the important role of the Law Society in making sure the voice of solicitors is heard and respected.”

The Law Society’s response stressed its bid to set the profession’s standards of behavior, conduct and ethics, leaving the enforcement of these to the SRA as an independent regulator.

Chief executive Catherine Dixon said: “Regulation is about the minimum regulatory rules which should apply to the whole market to protect consumers…