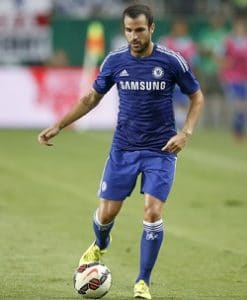 Cesc Fabregas playing for Chelsea: Tech companies will have access to Northridge clients

A leading sports law firm has launched an accelerator for high-growth technology companies that offers “a flexible approach to pricing to match the company’s growth curve”.

Northridge – which was set up 18 months ago by four lawyers previously at Charles Russell Speechlys – said the venture combined legal advice with “broader non-legal support and access to the firm’s extensive network of market-leading clients and contacts to facilitate fundraising and new business relationships”.

The firm said Northridge Track was an “alternative” to the typical accelerator or incubator programme, by providing “on-going, premium support” to high-potential technology companies that serve the sports, entertainment and leisure market.

It has partnered with industry adviser Charlie Greenwood to deliver the programme. Formerly of Nike and AEG, Mr Greenwood works with sports-focused venture capital funds and tech accelerator programmes in the US and UK, and will provide strategic advice to club members.

During the pilot phase, Northridge Track worked with:

Northridge partner Jon Walters said: “The sports and entertainment industries are becoming increasingly driven by technology – on the pitch, in commercial deals and to engage with fans.

“We recognise the challenges for high-potential technology companies seeking to stand out and grow within this competitive industry. We know how tough it can be to generate conversations with potential partners and customers, and to raise capital.

“Northridge Track has been designed to support the very best tech companies in this sector, built on an underlying proposition of first class legal advice.”

Cody Hoffman, the founder and CEO of Funder, said: “Northridge has provided invaluable support to Funder, both on our commercial negotiations and through introductions to their network. We view them as a genuine business partner, not just our lawyers.”

Northridge’s clients range from Puma, Betway, and IMG, to the Football Association, the British Horseracing Authority and World Rugby, as well as Chelsea FC, AC Milan and Everton FC, along with footballers such as Dele Alli, Raheem Sterling, Cesc Fabregas, Kevin De Bruyne and Thierry Henry.