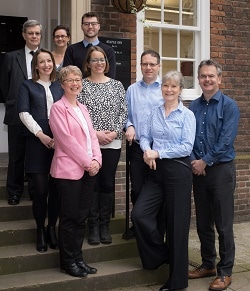 A niche law firm specialising purely in employee ownership has become an alternative business structure to extend its own scheme to non-lawyers.

Robert Postlethwaite, managing director and founder of Postlethwaite Solicitors in London, said his firm, a limited company, was one of the first in the country to introduce employee ownership four years ago.

He said the arrival of chartered tax adviser Emma Wise as a director, along with another tax specialist as a fee-earner, had helped trigger to the move to an ABS. If the firm had remained as it was, he said non-lawyer share ownership would be limited to less than 10%.

Mr Postlethwaite said the firm, based at Staple Inn near Chancery Lane, had a staff ownership scheme which combined ownership of shares with options to acquire.

“It works extremely well and there is a lot of evidence that it works well across a range of businesses, not just professional services, but especially where the value is in the people. That description would apply to most law firms in the UK.

“I would encourage more law firms to look at it. It is certainly work a look, and many will find it could be part of their strategy for becoming a 21st century law firm.”

Mr Postlethwaite said most of the firm’s clients were tech businesses but it was also advising a regional law firm which wanted to introduce employee ownership.

“Law firms tend not to be early adopters, and there’s an amount of caution in the way they operate,” he said. “They watch other people before making a decision.

“Now they can see different approaches being trialled in the UK, I would expect to see more going down the employee ownership route. It’s not going to become universal, but it will be more common.”

ABS Triton Global embraced employee ownership in 2014 and has seen the benefits of it, while south-west law firm Stephens Scown converted to an ABS in March this year, introducing an employee ownership scheme which allowed it to remain a partnership, after three years of negotiations with the tax authorities and the SRA.

Meanwhile, AIM-listed Gateley launched an employee share scheme last month that will enable all members of staff at the ABS to secure up to £500 of shares every month at a discount of 20% on their original purchase price.

Stephens Scown’s managing partner Robert Camp will be speaking about his firm’s scheme at next week’s Legal Futures Innovation Conference.