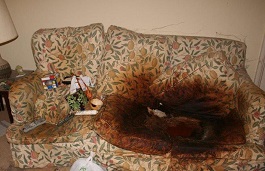 A solicitor who specialised in acting for the elderly and their families has been jailed for two and a half years for the wilful neglect of her own 79-year-old mother, who died in squalor despite her daughter having power of attorney to act on her behalf.

The prosecutor who secured the conviction of Emma-Jane Kurtz, who was an associate at Reading-based regional firm Boyes Turner, described it as “one of the most shocking and sickening cases of neglect I have come across”.

Ms Kurtz, 41, was convicted last month [1] and then sentenced on Friday.

Officers attended her home in Didcot in 2014 after a report of the death of her 79-year-old mother. Cecily Kurtz died on a sofa at the property.

Medical crews which attended became concerned about the condition of the property and of Mrs Kurtz, and officers subsequently launched an investigation.

Investigating officer Detective Constable Francesca Griffin said: “Mrs Kurtz was found on a sofa and she had been slumped over with her chin on her knees for five days.

“Emma-Jane Kurtz said she had gone in to the room with her mother in three or four times a day. There had been many opportunities over months and years to help her and remove her from that situation.

“This deeply tragic, yet avoidable, case is a reminder that we all have a responsibility to look out for others in our community.”

“Cecily lived at the dilapidated property with her husband and daughter, Emma-Jane Kurtz, a practising solicitor whose areas of specialism included ‘elder abuse’, ‘power of attorney’, and ‘preserving home assets in the event of long-term care’.

“Cecily was found dead on a sofa sitting in a pool of diarrhoea in the most appalling and filthy state. She had been neglected for years in the most horrifically squalid conditions, she weighed 39kg was emaciated and her long hair was matted. She was covered in her own excrement and had numerous urine burns to her body.

“The investigation established that she had suffered from mental illness for many years and hadn’t been seen by others for a period of 10 years before her death. She had suffered unimaginably and died in the most undignified manner.

“It is rare to come across a case that involves such sheer and blatant neglect against a vulnerable, elderly woman, by someone who was supposed to love and care for her.

“This has been one of the most shocking and sickening cases of neglect I have come across. We have worked closely with Thames Valley Police since this investigation was launched and as a result of the hard work and diligence of the prosecution team, a just outcome has been achieved for Cecily.”