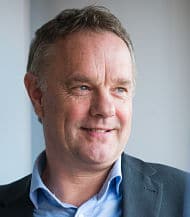 Camp: “not a standard ABS”

South west law firm Stephens Scown is to become a pioneering alternative business structure at the end of his month, which will allow it to remain a partnership while introducing employee ownership.

Managing partner Robert Camp said the new-style ABS had only been approved after three years of painstaking negotiations with the tax authorities and the Solicitors Regulation Authority (SRA).

“It’s not a standard ABS,” Mr Camp told Legal Futures. “We’re not bringing in non-lawyer partners or external ownership. The SRA said it’s the first they’ve seen – which is why it took so long to go through.”

Stephens Scown has over 300 staff, based at three offices in Exeter, Truro and St Austell. Mr Camp said the firm’s ABS license was approved by the SRA in February and would become effective at the end of this month.

The firm will remain an LLP, but one of its members will be Stephen Scown Limited, a company owned by the firm’s staff through an employee benefit trust.

Mr Camp said that from 1 May 2016, the start of the law firm’s new financial year, 50% of the firm’s profits above a certain threshold would be paid into a bonus pot to be shared by the staff.

Unlike the firm’s existing staff bonus scheme, he said staff would know from the beginning of the year what the threshold was and what they needed to do to earn themselves a share of the profits.

“At the moment we have a straightforward discretionary bonus scheme. The new scheme will make things much clearer for the staff, giving them more of an incentive to pull together and make the firm a success.

“They will not have to wait until the end of the year to find out what the bonus is. They will know where the threshold is, and that after that every 50p will go to them.”

Mr Camp said that, unlike John Lewis, only a minority of the equity in Stephens Scown would be owned by the staff. However, he said, like the retailer, the firm’s new structure would allow it to concentrate on client service.

He said that no top 200 law firm had adopted a similar scheme, though Mischon de Reya had promised to next year and much smaller firms may have implemented employee ownership schemes.

“I hope our scheme shows other partnerships a way forward,” Mr Camp said. “This model could become a blueprint for thousands of partnerships across the country in law, accountancy and many other professional services sectors.”

Stephens Scown is not the first legal services business to use an ABS to introduce employee ownership.

David Simon, chairman of Triton, said an employee ownership trust owned a minority of the firm’s shares, originally 10% when the scheme was set up almost two years ago.

He said that every year employees were given the option to subscribe to a chunk of shares, which vest in them after a five-year period, and that 60% of staff in the UK had already subscribed. He described employee ownership as a “gradual thing”.

Mr Simon added: “As one of the front-runners in the employee ownership revolution, we’re delighted to see Stephens Scown, and Mishcon de Reya, getting into this wonderful form of alternative capitalism. We hope others will follow.”