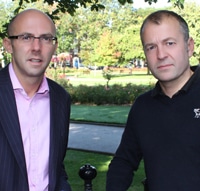 Neil Hudgell Solicitors, the law firm which two years ago launched the website ‘’ targeted at personal injury firms looking to exit the market, has formed a joint venture with national practice Simpson Millar to expand the offering.

Both firms will “invest resources” so that it can move beyond just buying up personal injury and clinical negligence cases. Whilst it is expected that these will remain the main focus, now any case in the areas of law practised by the two firms will be considered.

Neil Hudgell, managing director of Neil Hudgell Solicitors, said the default position is that the two firms will share caseloads equally where they both cover the area of practice.

To date his firm has spent £4m on 20 deals with cumulative work-in-progress (WIP) of around £10m, including the purchase of four legal practices, doubling the headcount in the process to around 110.

However, Mr Hudgell said he was surprised by “how slow the stampede to get out of PI has been” this year – possibly because the impact of the new portal fees has not really kicked in.

He emphasised that no deal is too small – one of his acquisitions was of just three multi-track files with £50,000 of WIP on them collectively, which could end up delivering three times that in fees.

Simpson Millar has also been acquiring other practices and caseloads, with deals to date reaching double figures. Its last acquisition – completed in July 2013 – included a £6m book of clinical negligence work.

An agreement for Slater & Gordon to itself acquire Simpson Millar was announced earlier this year but was recently put on ice until 2014.

Mr Hudgell said: “The timing of the launch of this joint venture could not be more appropriate given the problems faced by practices through the market changes, lack of bank funding and professional indemnity insurance.”

He said that while he has “never been first through the door” to acquire firms and WIP books, he has succeeded because “we put the cash on the table”. He said he did not understand why sellers would agree to an earn-out as the conduct of their cases and the amount they make is then in someone else’s hands.

Neil Fearn, partner and head of clinical negligence at Simpson Millar, said: “The common growth strategies embraced by both firms over the last few years have meant that we have gained immense experience in providing solutions for those who want to sell their caseloads or practices.

“This joint venture will mean that we have even more resources at our disposal to facilitate these deals and help other practices which may be in difficulty or wanting to exit the market for other reasons.”

Last week Liverpool firm SGI Legal – which bought the PI book from failed midlands firm Challinors and is on the look-out for more deals – that want to get out of PI have just three months to gain best value for their WIP.