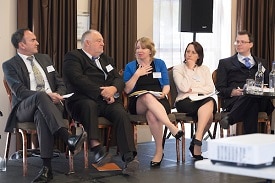 The boss of a claims management company (CMC) specialising in holiday sickness has accused solicitors of failing to vet cases for cold calling and fraud and “living in a world of denial”.

Richard Conroy, a food scientist and founder of sickholiday.com, told solicitors: “You can do a far better job of vetting the cases coming to you.

“Do not expect some of these CMCs not to be bent. Test them as to whether they are fraudulent or not.”

He said he had himself referred 26 firms to the regulator for taking on dodgy claims.

Speaking at this week’s PI Futures conference in Liverpool, Mr Conroy said some cold-calling organisations were huge, making “hundreds of millions” of calls, and “at the end of the process, there’s always a solicitor’s firm”.

He and others played recordings of calls in which CMCs blatantly lied to consumers about what they could expect from bringing a claim.

He went on: “Many are living in a world of denial of all liability, saying it is the CMCs that are doing it. Yes it is, but solicitors have the responsibility to take the time.”

Mr Conroy accused the Solicitors Regulation Authority (SRA) of doing “precious little” about bogus holiday claims until the Association of British Travel Agents (ABTA) managed to “force it into action”.

Earlier Susan Deer, senior solicitor at ABTA, said the proportion of holiday personal injury claims relating to sickness had increased from around half about three years ago to 90% last year.

“It’s important that we recognise that it’s not just CMCs but law firms failing to carry out due diligence on claims as they receive them.”

Referring to the government’s plans to introduce fixed recoverable costs for holiday claims, she said: “These claims need to be brought onto a level playing field with other personal injury claims of the same value. That is not removing access to justice.”

Asked for the provenance of the statistic that holiday sickness claims had increased by 500%, which has dominated debate on the issue, Ms Deer admitted that the data came from only “a proportion” of ABTA members.

It had asked members for figures and said 500% represented the increase only for those who replied, and related to the period 2013 to 2016. She pointed out that, unlike insurers, tour operators had not been set up to monitor fraudulent claims, as they were not hitherto a problem.

Sarah Hill, partner and head of fraud at law firm BLM, said the “real issue” for her was that “some of the fraudsters operating in the whiplash space” saw holiday claims as an opportunity.

She said signs of fraud included late claims, no corroborative evidence and serial claims relating to the same hotel.

“Why would you go back to the hotel that made you sick the previous year?” she asked.

Andrew McKie, a barrister at national chambers Clerksroom, said there had been an “influx of CMCs” into holiday claims work from RTA, but it was a “myth” that because illness was not reported to a hotel or GP, it was a fraudulent claim.

He said some law firms were vetting claims “very effectively”, while others were not, and suggested that they should carry out Facebook checks on claimants among other safeguards.

Clive Garner, head of the international personal injury team at Irwin Mitchell, said he had been dealing with holiday sickness claims over the past 20 years.

He said tens of thousands of genuine claimants had received compensation and “quite a large number” of victims had ended up with permanent health problems.

Mr Garner said he had noticed fewer CMCs “knocking at his door” in recent months – in any case, Irwin Mitchell does not buy work in from CMCs – while some law firms that had hoped holiday sickness claims were “easier than RTA”, were trying to offload their caseloads.

He said the SRA’s recent warning notice, reminding solicitors of their duties when dealing with holiday claims, was a “good thing” and made it clear that solicitors were taking responsibility as a profession and not “fuelling the fire of bogus claims”.

Mr Garner added that he believed claims were now at a “high point”, and predicted that the number would soon start to fall. “There are very few bogus claims. The vast majority of claimants are genuine.”