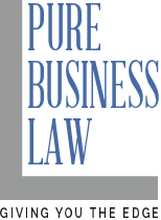 A solicitor has fought off a challenge to register a trade mark for her law firm after the Intellectual Property Office (IPO) judged it was likely to carry little risk of confusion.

The application, for Pure Business Law with the slogan ‘Giving You The Edge’, was submitted by founder Eve Jarrett, whose Milton Keynes firm calls itself ‘The entrepreneur’s law firm’.

It was opposed by Avidity IP in Stratford-on-Avon, the owner of brand Pure Ideas, which it registered in 2010.

Ms Jarrett argued that while her firm’s services – intellectual property is part of its wider offering to businesses – were “identical or similar” to those offered by Avidity, there was little likelihood of confusion.

Avidity claimed that the average consumer would not expect two separate commercial undertakings in the same niche field of practice to operate under such similar marks.

However, coming firmly down on Ms Jarrett’s side, the IPO’s adjudicator found the competing trade marks “to be visually similar to a low degree, aurally similar to at best a medium degree and conceptually similar to the limited extent that both are likely to evoke the concept of specialism/expertise”.

He also found Avidity’s trade mark to be “distinctive to a fairly low degree”.

Further, the likely consumer of such services was likely to pay a “heightened degree of attention” to their choice, reducing the chances of confusion.

The adjudicator concluded: “Even in relation to the identical services at issue, I see absolutely no reason why an average consumer… would assume the services at issue originate from the same or related undertakings, simply because the competing trademarks contain the word ‘PURE’ integrated as part of a phrase.

“Much more likely, in my view, is that they will assume that the word ‘PURE’ has been adopted by completely unrelated commercial undertakings to reflect what those undertakings consider to be their particular specialisms/expertise.”

The adjudicator awarded Ms Jarrett costs, but rejected her invoice for £5,000. Instead he ordered that Avidity pay £1,000, subject to any successful appeal.