Solicitor who used client money to buy jewellery is struck off 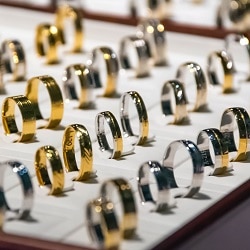 A director of a former London law firm who admitted fabricating grants of probate and using client money to buy jewellery has been struck off.

The Solicitors Disciplinary Tribunal heard that Eilish Adams took £4,635 from the estate of a client to pay for “the manufacture and purchase of jewellery” for herself.

The forged grants were either used by the firm to administer estates or “alternatively provided to executors on the basis that the grants were genuine”.

Approving an agreed outcome between Ms Adams and the Solicitors Regulation Authority (SRA), the SDT heard that it launched an investigation after a number of complaints about the solicitor, who was admitted in 2004.

The SRA said that during a period of over four years, from January 2014 to June 2018, a number of “irregular payments of client funds” were made, totalling nearly £1.3m.

Funds held on behalf of various estates were paid to the beneficiaries of unrelated estates or used to pay expenses incurred in the administration of other estates.

“The misallocation of client funds was accommodated, in part, by way of further misallocations of funds from unrelated client matters resulting in a process known as ‘teeming and lading’.”

The SRA said “in many instances the misallocation was disguised by a misleading narrative on the client ledgers” and there was no “obvious shortage” on client account.

However, the client liability caused by the teeming and lading resulted in a shortage of almost £421,500 by July 2018, which “has not been replaced” by Ms Adams.

The solicitor also admitted overbilling clients between July 2016 and April 2018.

Bills totalling £75,700 were raised without being properly submitted to clients, “in excess of agreed fees” or where fees charged were “excessive and unjustified”.

Ms Adams deposited £75,000 into the firm’s office account in October 2018 and her “business partner”, who was not named, transferred the full amount of £75,700 back into the client account to correct the position.

Though it was not mentioned in the agreed outcome, according to the website of The Gazette, the official record of insolvency proceedings, administrators were appointed for the Law House in December 2018.

The SRA said client funds were used to pay for Ms Adams’ jewellery and she tried to conceal the misuse of client money by false accounting. She had committed “serious acts of dishonesty” over an extended period.

The SDT said Ms Adams had produced a statement of mitigation, including “extensive detailed personal medical and biographical information, and a description of work pressures at the relevant time”, but she did not argue that it amounted to ‘exceptional circumstances’ which should protect her from being struck off.

The tribunal directed that her statement of mitigation should not be published.

Ms Adams “stated she was profoundly sorry and ashamed of her actions and the harm caused to others”.