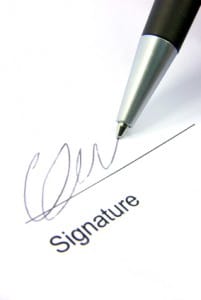 Signature: no clear explanation for action

A solicitor who forged his client’s signature on a witness statement has been struck off, even though the client himself expressed surprise that disciplinary action had been taken.

The Solicitors Disciplinary Tribunal (SDT) said “it was regrettable that a long and previously unblemished career should end in this way”.

Though Paul Geoffrey Dean Smith’s action dated back to 2008, it only came to light four years later when the client’s wife saw the witness statement.

A property company had instructed Mr Smith to act in respect of a loan from Lloyds TSB Bank, secured against a residential property, but the mortgage deed was not registered at Companies House within the requisite 21 days. Mr Smith realised that his firm had made an error and applied to the High Court to extend the time.

But for reasons which were not clear, he signed the witness statement of the company’s director, ‘Mr W’. The application was granted.

When the issue was raised with him in 2012, Mr Smith initially denied forging the signature but, according to the SDT, “having reviewed the file, had come to the conclusion that he ‘must have signed a statement using a signature purporting to be that of Mr [W]’.

“It was very difficult for the respondent to explain his actions. He recognised that they were wrong, and apologised unreservedly to the court.”

He reported himself to the Solicitors Regulation Authority and stopped practising, after a 35-year career.

The SDT found [2] that Mr Smith had acted dishonestly, which requires both an objective and subjective test to be satisfied. It said “there could be no doubt that reasonable and honest people” would consider his action to be dishonest, while the solicitor had “admitted that he was aware at the time of doing so that it would be considered dishonest”.

But Mr Smith accepted that he would be struck off, although his counsel also reminded the tribunal that there was no wider harm caused beyond damage to the reputation of the profession and the need for the High Court to re-examine the charge. He had self-reported, admitted his mistake and co-operated fully.

“It would be a great punishment after a long proud and happy career and a matter of deep regret to the respondent,” the tribunal was told.

The SDT said that in cases such as this, strike-off was the appropriate order unless exceptional circumstances were identified, and none were pleaded nor found.