Solicitor who changed dates of charges with Tipp-Ex struck off 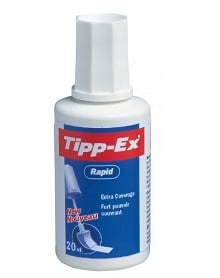 Tipp-Ex: Solicitor did not tell client what he had done

A property lawyer who used Tipp-Ex to change the dates of charges he needed to register at Companies House has been struck off by the Solicitors Disciplinary Tribunal (SDT).

The tribunal said it was concerned that Nicholas St John Gething, who described changing the dates as a “quick fix”, did not seem “to understand or appreciate the seriousness of what he had done”.

The SDT heard that in two property transactions Mr Gething needed to register both a fixed and floating charge with the Registrar of Companies within 21 days.

He missed the deadlines because the accompanying forms he sent with the charges had been completed incorrectly and, by the time they were returned to him, it was too late.

Mr Gething responded by submitting further copies of the charges to the registrar, which “did not bear the original date, but which had instead been re-dated to make it appear that they were being delivered within the time limit”, the SDT recorded.

Neither the mortgage lender nor the purchasers of the two homes involved had re-executed the documents or given their consent to the re-dating.

At his disciplinary hearing, Mr Gething stated that he was “embarrassed for having got himself into this position, and that he had thought what he had done was right at the time”.

What he described to the tribunal as a “quick fix” had not resolved the matter and “he now realised his conduct had been wrong”.

However, the SDT said that, while Mr Gething had shown “some degree of insight” during the hearing, he “still did not appear to grasp the gravity of his actions”.

The tribunal went on: “He did not seem to understand that it was inherently unacceptable to change the date on legal charges being filed on behalf of clients, and then present those charges to third parties as authentic copies of the originals, when they were not.”

The SDT said it “may well have been the case” that other lawyers had indicated to him during his career that changing the dates was “one way of dealing with late applications for registration”, but Mr Gething knew a court application should have been made or “at the very least” his client and the mortgage lender should have been informed before dates were changed.

“Simply referring to his colleagues’ comments that had led him to believe this was a ‘common and unobjectionable practice’ did not detract from [his] own duties of honesty to his clients and third parties during the course of his work.

“It was absolutely sacrosanct that solicitors did not in any way mislead third parties, who relied on the veracity and integrity of documents submitted by solicitors.”

The tribunal heard that Mr Gething, born in 1963 and admitted in 1999, was working for Howell Jones at its branch office in Cheam, Surrey, at the time of the misconduct. He was the only residential property lawyer there.

He left Howell Jones in November 2016 for another law firm, but later that month Howell Jones reported what had happened to the Solicitors Regulation Authority.

Mr Gething admitted preparing and submitting falsified copies of charges to the registrar and acting with a lack of integrity and dishonestly in doing so.

Counsel for Mr Gething argued that there were exceptional circumstances which meant that the solicitor, who had presented “a picture of someone who would not knowingly have acted dishonestly”, should not be struck off.

However, the SDT found that Mr Gething’s behaviour was “deliberate and repeated”, and he had concealed it by not informing clients or mortgage lenders – having given evidence that a former colleague once told him that he would need to notify his client and the lender before changing the date on a legal charge in a situation like this.

The tribunal acknowledged that the risk of repetition was low, but considered that his conduct was “so serious” that public confidence in the legal profession would not be adequately protected by anything less than a strike-off.

Mr Gething was struck off and ordered to pay costs of £5,700.