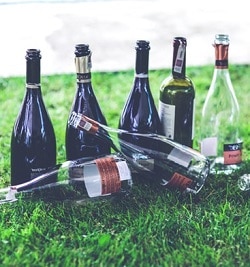 Empties: Both the solicitor and his mother had been drinking on the night in question

A solicitor who assaulted his “coercive and manipulative” mother after they had both been drinking has been suspended by the Solicitors Disciplinary Tribunal (SDT) for four months.

Graeme Clark Hall played the SDT an audio recording in which his mother “repeatedly used foul language about his sister”, stating that she hated her.

The tribunal found that the circumstances that led to his conviction were “unique to the unhealthy relationship he had with his mother, whose behaviour… had been irrational, obsessive and repeated”.

Mr Hall told the tribunal he had been living with his mother after becoming estranged from his civil partner in 2015.

“The respondent told the tribunal he had ‘snapped’ and shaken his mother. She followed him into the kitchen where the respondent pushed her and she fell to the floor.

“She refused the respondent’s request to help her and called him ‘dirty’, at which he had thrown a full basin of water from the sink over her, had partially refilled the basin and thrown that onto her as well.”

Mr Hall said his mother was sitting up when he went to bed. “So far as he was aware” she phoned his sister, who called an ambulance, though he was not aware of the ambulance coming.

“He had been woken by the police at 8am, when he was arrested.”

The SDT said Mr Hall, who was born in 1975 and qualified in 2002, admitted a charge of assault causing actual bodily harm and in March 2017 was sentenced to nine months in prison, suspended for 12 months, plus an order to undertake 20 days of rehabilitation activities.

The circuit judge described it as a “very sad case” where there was a lot of mitigation.

He also made Mr Hall subject to a restraining order, preventing him from contacting his mother, but she died the following month unexpectedly – and for reasons unconnected to the assault – at the age of 66.

In mitigation Mr Hall said his mother would “often rant and rave at him for hours at a time about a number of topics, including sex, death and religion”.

“It was not possible to escape “as she would follow him around the house and shout through the door if he closed the door on her”.

His mother “drank very heavily”, had become obsessed with her weight and “did not eat properly”, he said.

Mr Hall told the SDT about his physical and mental health problems, supported by letters from doctors, and about his medication.

He said his law firm had been supportive, but when charged with the offence he was dismissed as private client solicitor and had since been working in a warehouse for a record-packing business.

The tribunal accepted evidence given by Mr Hall’s civil partner, who said their partnership had not been dissolved, they still owned a house together and he hoped they could rebuild their relationship.

“The tribunal was satisfied on the evidence it heard that Mrs Hall had been repeatedly abusive towards the respondent and her behaviour had been coercive and manipulative throughout the respondent’s life.”

The SDT said it was satisfied that there was a “negligible risk” of similar behaviour.

However, the misconduct was too serious for a fine to be appropriate, and Mr Hall had to be removed from practice, although in this case the public did not need to be protected.

Public confidence in the profession required that Mr Hall be suspended for a period “which would at least cover the term of the suspended sentence”.

He was suspended for four months from 15 February and ordered to pay costs of £2,890.