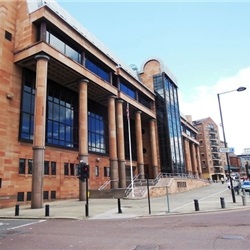 A solicitor jailed for more than three years for forging Land Registry documents in a family dispute with the owners of a Newcastle takeaway has been struck off.

The Solicitors Disciplinary Tribunal heard that Madasser Hussain was described by the judge who convicted her as “cunning” and “manipulative”.

Ms Hussain and her husband created a set of false documents for the purposes of putting a legal charge on a property belonging to the owners of the takeaway.

The charge, for £60,000 plus annual interest of 10%, was intended to compensate Ms Hussain and her husband for money allegedly owed to them by the takeaway owners. One of the owners was a relation of the couple.

In 2019 at Newcastle Crown Court, Ms Hussain was convicted of making a false representation to make a gain for herself/loss to another, and committing a series of acts with intent to pervert the course of public justice.

She was sentenced to three years and nine months in prison.

The solicitor, born in 1972 and admitted in 2002, worked at the Wakeel Partnership Law Firm.

The SRA said that, in the same year she was admitted, Ms Hussain and her husband invested a sum of money in the takeaway, called Spice.

In 2007 or 2008, they created false documentation for the purposes of placing a legal charge on a residential property owned by the takeaway owners.

The documents included a form CH1, “other relevant property documents” and a client matter file for the takeaway owners, who had not instructed Ms Hussain.

The owners were not aware of the charge until 2014, when they asked Ms Hussain and her husband to remove it.

The SRA said: “They refused to remove the charge, instead stating that the charge was legitimate. The matter was reported by the owners to the Land Registry and to the police.”

By the time of its discovery, the initial sum protected by the charge had risen to £115,000 due to interest. The takeaway owners racked up a further £30,000 in legal expenses and costs, although received £22,000 from the Land Registry through its indemnity scheme for such cases.

Sentencing them, His Honour Judge Batiste said of Ms Hussain: “Your account altered as the case progressed, you tried to tailor your evidence around the case against you and, frankly, sought to place blame on everyone except yourself for what occurred.

“I am satisfied from your evidence that you are a clever, confident, cunning and, when required, manipulative individual.”

HHJ Batiste said Ms Hussain involved a “more junior” colleague in getting the fake charge registered; the colleague owed the solicitor a favour because Ms Hussain had helped her get a job.

“Of course, she is one of the people who, during the trial, you sought to impugn the character of and blame for your wrongdoing.

“Your involving her was clearly designed to distance yourself from the charge and give a veneer of legitimacy to what was taking place, given it involved therefore a different firm of solicitors who were nominally registering the charge.

“I am satisfied that this was a sophisticated fraud involving significant planning.”

The SRA said Ms Hussain, who was released from prison in August last year on home detention curfew, realised that what she did was dishonest and “completely wrong”.

In mitigation, she said that following the “breakdown in the commercial relationship” with the takeaway owners “and the family pressure upon her, her judgement became so clouded that she felt it appropriate to secure the capital injected into the business”.

She claimed she never intended to enforce the charge but rather wanted “to provoke a family discussion surrounding the capital debt owed”, adding that the loss the takeaway owners actually incurred was a maximum of £8,000 – the legal fees minus the Land Registry indemnity.

Ms Hussain agreed that she should be struck off, which the Solicitors Disciplinary Tribunal duly did. She was also ordered to pay £1,150 in costs.