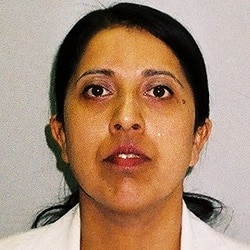 Bachada: Sentenced to four and a half years in jail

A solicitor jailed for falsifying documents to bring a civil claim against a former employee, in actions the sentencing judge said attacked “the very heart of the justice system”, has been struck off.

Diljit Bachada was sentenced last year [1] to four years and six months imprisonment after being convicted of two counts of fraud by false representation and two counts of committing acts with intent to pervert the course of justice.

Tharinjit Biring, who had assisted Ms Bachada by providing false information in a witness statement, was found guilty of perverting the course of justice and sent to jail for 19 months.

Ms Bachada, born in 1971 and admitted in 2001, was the principal solicitor at Worcestershire law firm Hollies Solicitors & Advocates.

The Solicitors Disciplinary Tribunal (SDT) struck her off after approving an agreed outcome between her and the Solicitors Regulation Authority.

A six-week trial at Bristol Crown Court heard that Ms Bachada sued the former employee for £21,000 for breach of her contract of employment. Attached to this claim were two contracts, each signed by the pair of them.

On closer inspection, the victim realised that she had never signed the documents. The matter was reported to the police, who examined the contracts and discovered anomalies such as an incorrect Law Society copyright at the foot of each page, while a clause stated in the contract did not come into force until July 2010. But the documents had apparently been signed in January 2010.

Ms Bachada also presented false documentation to the police in an effort to assure them that the dispute was genuine.

His Honour Judge Horton said: “You used all your ability to lie to the jury and I regret to conclude that you are a deeply dishonest woman.

“The determined, relentless and planned way you created the contracts, combining them with supporting documents to support a completely fraudulent history by documents aimed to deceive the police, the criminal and civil courts, which used every ounce of your professional knowledge of the criminal process, to seek actively over four and a half years to pervert the course of justice, has been a deliberate, persistent attack on the very heart of the legal system.”

Ms Bachada did not contest the strike-off, saying she wished to conclude it as soon as possible.