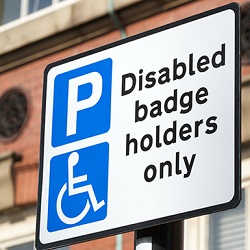 A solicitor who used a disabled badge that did not belong to him nine times to park near his law firm has failed in his appeal against being struck off.

Mrs Justice Lang said there were no grounds on which to impugn the decision of the Solicitors Disciplinary Tribunal (SDT), and held that the initial recommendation of the Solicitors Regulation Authority’s (SRA) investigator that Wahid Nazari just be fined did not raise a legitimate expectation that this would be the outcome.

Mr Nazari worked in the Haywards Heath office of leading personal injury firm Carpenters and used the disabled badge belonging to a family member for whom he was the primary carer.

He was convicted by Lewes Crown Court of three counts of using a blue badge with intent to deceive and fined £1,500, plus costs of £6,000. The SDT struck him off last year.

Lang J found no errors in the SDT’s decisions to refuse Mr Wahid’s application for an adjournment or to look behind his conviction.

For the latter, Mr Nazari relied on the recorder’s sentencing remarks, which made it clear that he had legitimate use of the blue badge, he did not gain any financial advantage or cause any harm, and the matter could have been dealt with by way of a strict liability offence where no intention to act dishonestly was required.

Lang J said: “The tribunal was entitled to reach this conclusion. The factors relating to the circumstances of the offence, on which the appellant relied, are mitigating factors that were taken into account by the recorder when sentencing at the Crown Court. They do not amount to exceptional circumstances.

“The fact that the appellant could have been charged with a lesser offence, as others have been, does not amount to exceptional circumstances. Here, the appellant was represented by counsel at the criminal trial and chose not to appeal his conviction.”

The judge also agreed that the SDT did not err in treating deception as if it were the same as the ordinary form of dishonesty: “The tribunal clearly appreciated that this was an offence of deception, and correctly applied the test for dishonesty to the facts of the offence.”

Similarly, the SDT was entitled to find that no exceptional circumstances existed to move away from striking-off as the appropriate sanction in cases of dishonesty.

“The tribunal correctly applied the principle in James that the most significant factor in the evaluation of exceptional circumstances is ‘the nature and extent of the dishonesty’,” said the judge.

“In my view, it was entitled to find that the appellant’s misconduct, which led to a criminal conviction, harmed the reputation of the profession and undermined the public’s trust in it.

“Its conclusion that ‘the misconduct was aggravated by the dishonesty and the fact that the offences had been deliberate, calculated and continued over a period of time’ was one which was clearly open to it on the evidence before it.”

The SRA investigator initially recommended a £2,000 fine for the misconduct, and no referral to the SDT, which the authorised decision-maker did not accept. Mr Nazari argued that this nonetheless gave rise to a legitimate expectation on his part.

But Lang J said it was clear from the terms of the report and the covering letter sent to Mr Nazari, and the statutory context in which they were sent, that this was only a recommendation, not a decision, and that a decision was to follow.

“Therefore the report and the letter were not clear and unambiguous statements, devoid of relevant qualification, which were capable of giving rise to a legitimate expectation on the part of the appellant that he would not be referred to the tribunal, and that he would not receive a more severe sanction than a fine.

“In my judgment, no legitimate expectation has been established by the appellant.”