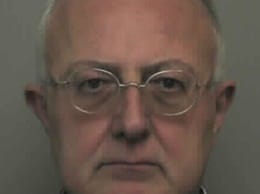 Coleclough pictured at time of his conviction

An eminent tax lawyer and former partner at leading London law firms has been struck off following his conviction for multiple pornography offences – but he continues to practise from an unregulated entity.

In April 2016, according to the Solicitors Disciplinary Tribunal, the sentencing judge stated several factors that led him to conclude that Coleclough’s offending crossed the threshold for custody, including that there were a number of images of very young people and the offending took place over 14 months.

However, he concluded that immediate custody would be counter-productive to Coleclough’s efforts to understand his offending and prevent it happening again.

The one-time head of corporate and indirect tax at Simmons & Simmons was sentenced to 14 months’ imprisonment suspended for 24 months, together with additional orders including a 10-year sexual harm prevention order; for notification requirements to be in place for 10 years; to undertake 100 days of rehabilitation activities and to participate in an accredited offender programme.

Prior to his arrest, he had also been a partner and global leader of indirect taxes at PwC, a consultant at London law firm Mishcon de Reya, and president of the Chartered Institute of Taxation in 2013/14.

However, his LinkedIn profile explains that he is now a director of Caesium International LLP, which is described as a “tax consultancy” operating primarily in the high net-worth market. On Twitter, he describes himself as a “tax lawyer” – ‘lawyer’ is not a protected title.

Coleclough was arrested following information provided to police by their counterparts in New Zealand. When his computers were forensically examined, a large number of pornographic images of children and extreme pornography was found to have been saved to the hard drive.

The SDT noted that Coleclough “did not want his family and medical information to be considered in public and did not seek to excuse his criminal behaviour and convictions, which he accepted amounted to a very serious breach of the criminal law”.

He wished to agree to being struck off so as not to increase costs further, and the SDT agreed that this was a “proportionate and appropriate sanction”.

The Chartered Institute of Taxation excluded him from membership last November.