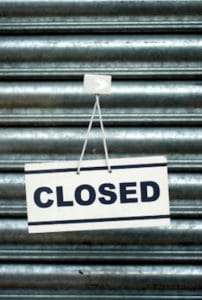 Shut down: All files and computers went missing from firm

A solicitor who took £1m from the legal aid fund by fabricating cases and making hundreds of improper claims, and then abandoned his practice, has been struck off.

The Solicitors Disciplinary Tribunal (SDT) heard that on the first day of a two-day Legal Aid Agency (LAA) visit, Jimoh Adun said he had a problem with one of his children and had to leave – the investigating officer never saw him again.

A few days later, the Solicitors Regulation Authority (SRA) tried to visit his offices in Tottenham, north London, but they were closed. After obtaining a High Court order to gain entry, the regulator found all client files and computers had been removed.

Another order, allowing the SRA to check Mr Adun’s house, similarly came up short and he failed to comply with the court’s demand that he produce the firm’s records.

Mr Adun, who was living in Nigeria at the time of the hearing on 8 March, did not attend the tribunal.

Born in 1962 and qualified in 2009, Mr Adun was the sole principal of Nieko Solicitors and held legal aid contracts for crime, mental health and prison law.

The LAA first raised its concerns in 2014 over the validity of Nieko’s claims for payments for applications to and attendances at the First-tier Tribunal (Mental Health) and a review of 14 sample cases by that tribunal showed they were not genuine.

The SDT found that, between December 2010 and October 2014, Mr Adun submitted 443 improper claims for costs and disbursements to the LAA totalling £994,396.

In a statement sent to the SDT, he denied the allegations, blaming his fee-earners, who he said gave him the information to submit to the LAA, which he took on trust.

The tribunal said as the sole principal, “if someone, other than him, was committing a fraud on the LAA, he should have had systems in place to ensure that this could not happen”.

Further, the fee-earner referred to in two of the three sample cases before the SDT had left the firm before the matters were alleged to have started.

Finding Mr Adun’s actions dishonest, the SDT said the explanations he had provided “were not credible”.

In mitigation, Mr Adun said he had found it hard to marry his professional and family duties, meaning he depended on his supervisory staff for support. He also argued that the layout of the office over four floors, and with remote workers, made it hard to supervise.

He told the tribunal that his marriage had broken down, he was homeless and had suffered from depression since the firm closed. He said he owed numerous debts and had no other way of proving poverty than returning to London to claim benefits.

The SDT, though, found him completely culpable and that his actions meant Mr Adun should be struck off.

“His motivation had been financial and his actions planned… Although his level of post qualification experience was not that significant it was sufficient for him to be able to run his own firm.”

It added: “There were a number of aggravating factors. Dishonesty had been alleged and proved. The conduct was deliberate, calculated and repeated. It had continued over a period of time.

“The respondent had told the LAA that he was not responsible for the improper claims and in this way had sought to conceal his wrongdoing… The LAA had lost money, fee earners at the firm had lost their jobs and with the abandonment of the practice the service to clients, some of whom were imprisoned or detained, was disrupted.

“Client files had not been recovered meaning it was unclear what advice was required by whom. There were no mitigating factors. The tribunal considered that the overall seriousness of the misconduct was at the highest level.”