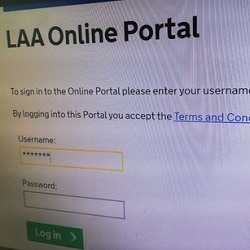 A young solicitor who botched the backdating of legal aid forms and then lied about it to his employer has agreed to leave the profession.

The Solicitors Disciplinary Tribunal (SDT) heard that when Charles David Myers realised his attempts to change an already fake date on an application “had rendered the form unusable”, he told his supervisor and a partner it was missing from the file.

Mr Myers was a trainee solicitor at Mintons Solicitors in Leeds when the firm was instructed by Clients A and B in November 2016 to obtain legal aid for an inquest hearing.

An agreed outcome with the Solicitors Regulation Authority (SRA), which was approved by the tribunal, said that Mr Myers submitted an application, signed by Client B, via the online portal on 22 December 2016, although he had not also obtained Client A’s signature on the legal help form.

The Legal Aid Agency (LAA) said that, due to technical problems, Mr Myers should print out the client declaration in the application and get Client B to sign it. Mr Myers failed to do this, but the application was approved anyway and a legal aid certificate issued in February 2017.

The inquest was held in November 2017, the same month that Mr Myers was admitted as a solicitor.

He got the signatures he needed at the inquest, backdating Client A’s signature on the legal help form to November 2016, and Client B’s on the client declaration to 23 December 2016.

However, in advance of an audit of Mintons by the LAA in February 2018, the solicitor realised that the legal aid application was “likely to be declared invalid”, because the client declaration had been backdated to the day after the application had been submitted.

Mr Myers attempted to change 23 December 2016 to 20 November 2016, but in doing so he “rendered the form unusable” as the “attempted amendment was obvious”.

The solicitor decided to destroy the form, putting it “in the shredding bag”, and telling his supervisor that there was “no signed document on file and the firm did not have another copy”. He hoped to complete a retrospective assessment form.

He repeated the lie to partner Julia Morrill, but advance of a meeting with his supervisor and Ms Morrill, Mr Myers confessed to another partner, Simon Minton. The solicitor left the firm in March 2018.

In mitigation that was not agreed by the SRA, Mr Myers argued that he had been put under “an untenable level of pressure” by Mintons.

Mr Myers said half of his training contract had taken place while his supervisor was on maternity leave and he was expected to progress inquests and associated litigation as well as preparing wills and lasting powers of attorney, attending court for the social housing duty rota and police stations for the crime department.

He described himself as the firm’s “senior inquest lawyer” during the maternity leave and said he had to supervise another more junior trainee and a paralegal.

He said the actions that led to his misconduct “were borne out of an extended period of unsustainable levels of responsibility, pressure and stress, commencing in late 2016”.

However, Mr Myers did not argue that the mitigation amounted to ‘exceptional circumstances’ such that he should not be struck off.

He admitted acting with a lack of integrity and dishonestly. Ultimately, Mintons did not make a claim against the LAA for funding and returned the clients’ £4,424 contribution.