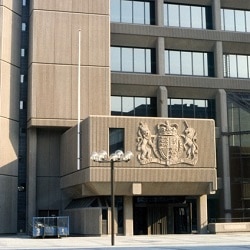 A solicitor who was being groomed to take over a Liverpool law firm has been jailed for a £13,400 fraud, leaving his former boss with an “indescribable” feeling of betrayal.

Gregory Davies, who lives on the Wirral, pleaded guilty to one count of fraud by false representation when he appeared at Liverpool Crown Court. He was sentenced to 12 months in prison.

The charges relate to his work at Catherine Higgins Law between September 2015 and July 2016.

During that time he duplicated paperwork and created fake policy documents to request money that was paid into his own bank account.

He also gave his clients his own bank details instead of that of his employer for them to pay for services carried out.

Further, Mr Davies diverted money from people’s estates to his own bank account and on one occasion took £540 from the estate of a deceased woman which he disguised as being a payment for funeral costs.

In a victim impact statement, the firm’s managing director, Catherine Higgins, said: “I placed my trust in Greg. I expected him to have the high standards and integrity I would expect from any solicitor. I came to regard Greg as a long-term prospect and hopefully my successor to enable me to eventually retire.

“We would talk and make plans for the future of the business and at no time did I suspect that he was committing fraud at the expense of the firm and our clients.

“When Greg’s criminal behaviour was uncovered I felt numb and sick. When it became clear that Greg had stolen from the firm, the feeling of betrayal was indescribable.”

Speaking after the sentencing Ms Higgins said: “I am pleased that these proceedings are now concluded. It has been a difficult time for me and my firm and I would like to thank everyone involved for their tenacity and patience.

“It is disappointing when a member of the legal profession falls below the standard required but I can assure my clients that in each case where a loss was identified, my firm has repaid that loss to the clients.

“When his actions were uncovered by his colleagues, only then was the full extent revealed. I immediately reported the matter to Action Fraud and the Solicitors Regulation Authority.”

According to the Liverpool Echo, Mr Davies’s counsel told the court that the solicitor “perceived that he was overworked and overstressed” and “considered rightly or wrongly he was due a bonus of £14,000”.

It said Mr Davies admitted fraud when prosecutors agreed to drop charges of perverting the course of justice.

Detective Sergeant Chris Hawitt of Merseyside Police said: “Davies carried out this fraud with a blatant disregard for his clients or his employer.”