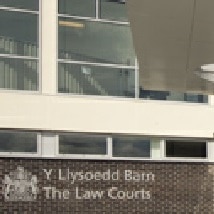 A former solicitor has been jailed for four years and two months after admitting forging clients’ wills for his own benefit.

Davies admitted seven charges including fraud and forgery between 2010 and 2016.

He admitted three fraud charges, two counts of forgery, concealing criminal property and using a false instrument by submitting a forged will to a probate registry.

Davies was struck off in 2017 after taking the money from a client under a power of attorney after he had died – sometimes from cash points as he had access to the client’s cheque book and cards – because he did not tell the bank.

He also crated false wills for other deceased clients to pay off the legitimate beneficiaries of the first estate.

He said the beneficiaries were “hassling” him to distribute money from the estate, so he faked the wills to access money from other estates.

The Solicitors Disciplinary Tribunal said he thought it would be harder to detect his conduct given that both clients were dead.

His Honour Judge Rhys Rowlands in Mold Crown Court said Davies was receiving an average of £48,000 a year for five years on top of his salary.

“Quite what you did with all that money, only you know,” he said, according a local report of the hearing. “But the overwhelming inference is that it was not expended on everyday living expenses or debts. The effects on others have been profound.”

The judge described Davies’s actions as “a quite shocking breach of trust”.

John Wyn Williams from Exchange Chambers, mitigating for Davies, said his client had asked him to publicly apologise to the families affected, and his colleagues.

He said the defendant had amassed debts but that there was no extravagant lifestyle.

A total of £44,000 has since been repaid, the court heard, and there will now be an investigation under the Proceeds of Crime Act.