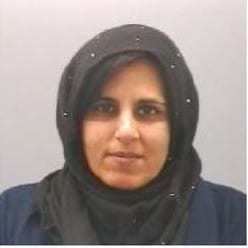 A property solicitor who forged a Land Registry document as part of a dispute with a business partner has been jailed along with her husband.

Madasser Hussain, 44, was handed three years and eight months in prison, and her husband Agha Rashid, 46, three years and three months, after being convicted of fraud by false representation and conspiracy to pervert the course of justice.

Teesside Crown Court heard that Ms Hussain had invested £60,000 into the Spice of Punjab takeaway in Newcastle in 2002, at which point her husband took on a position working behind the counter.

But in 2008, the takeaway manager realised that Rashid had mistakenly been overpaid during his employment.

The couple refused to pay back the money and instead claimed that Mr Rashid’s wages must be honoured, due to the length of time that had elapsed.

However, the manager did not agree to this and instead dissolved the business partnership with Ms Hussain, as the overpaid salary was around £60,000.

In a bid to protect her investment, the solicitor later forged a Land Registry document to lodge a charge of £60,000 on a residential property which she believed belonged to the takeaway owner, which later blocked its sale.

Ms Hussain refused to lift the charge, hoping it would force the takeaway owner to pay back her investment.

However, the police were called and detectives from the North East Regional Special Operations Unit launched an investigation. They uncovered the forged Land Registry paperwork as well as other legal documentation that Ms Hussain had created in a bid to cover their tracks.

According to a report in the Newcastle Chronicle of Ms Hussain’s trial, Judge Simon Batiste labelled her a “clever, confident, cunning and manipulative individual”.

It reported him saying: “In many ways it’s made worse by the fact you, Hussain, were a solicitor. You abused your skills and training to behave in the way that you did.

“It’s clear as a female Asian solicitor you encountered considerable barriers you had to break through with great perseverance and it’s equally clear you are an able and well-regarded solicitor.

“The fact of your conviction will almost certainly mean you will cease to be a member of this profession you worked so hard to get into. Society is right to expect qualified lawyers will act with the utmost integrity.”

Detective Constable Steve Brown said: “This was a complex fraud investigation that has taken almost five years to resolve.

“It was a crime that was motivated by desperation and greed after this married couple lost out on their investment in this business.

“Rather than accept that their money was gone, they instead resorted to criminal means to try and extort money from the takeaway owner. Their poor decision making has instead landed them behind bars and I am satisfied this is a fitting sentence for their crime.

“Anyone who thinks they can forge documents for their own financial gain, especially professional enablers such as solicitors, should take a look at this case and realise that they won’t get away with it.”