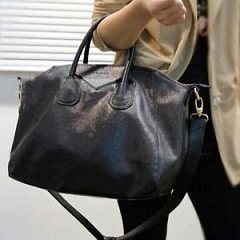 A solicitor who “misused his position and duped his business partner” – leading to the SRA Compensation Fund paying about nearly £170,000 – has been struck off by the Solicitors Disciplinary Tribunal (SDT).

The SDT said John Allan Jones, a partner at Hereford-based Carver Jones, was responsible for a “clear and blatant breach of trust” in the use of client money.

Lucinda Jane Rosemary Rowberry, his partner at the law firm, who in one instance carried £21,000 in client cash through the streets in her “capacious handbag”, was fined £5,000.

The firm was shut down in December 2015 after both partners were declared bankrupt.

The SDT heard that both solicitors remained on the roll at the time of their hearing in May, but their practising certificates were suspended because they were declared bankrupt a few days after their law firm closed. Mr Jones was born in 1945 and Ms Rowberry in 1950.

Before the closure, in October 2015, the Solicitors Regulation Authority (SRA) began an investigation into Carver Jones following “concerns regarding compliance” with the Solicitors Accounts Rules (SAR).

The SRA intervened into the firm, which had been closed for almost six months, in June 2016.

Mr Jones was accused by the regulator of a long list of rule breaches, focused in particular on several transfers of money from client to office account in breach of the SAR.

He also faced charges of failing to act with integrity, misleading an SRA investigator, and charging a client “an amount which he knew to be in excess of the amount which was properly due”.

All but a handful of over 30 allegations against Mr Jones were upheld by the tribunal. Among them, the SDT upheld all four accusations of dishonesty, which he denied.

The tribunal said there was “limited information” on the motive for Mr Jones’s dishonesty, but “monies had been used to pay the HMRC” and the misconduct was planned.

“He had direct control of the circumstances giving rise to the misconduct and he was very experienced solicitor with over 40 years’ experience at the time of the misconduct.

“The harm caused was significant and there had been over £166,000 claimed against the Compensation Fund to date.”

The SDT said the solicitor’s dishonesty was “deliberate, calculated and repeated”, and he told Ms Rowberry that he “would rectify matters but never did”, and “prepared bills, but they had never been sent out”.

Ms Rowberry told the tribunal of the “high regard” in which Mr Jones was held locally, but the SDT said he had “misused his position and duped his business partner”.

Mr Jones’s mitigation was that “the pressures of work were too great and in the latter years of his practice, these pressures were having a serious detrimental effect on his health, both mental and physical.”

But the SDT considered that while there were several aggravating factors, there were no mitigating ones, and only striking off Mr Jones would reflect the seriousness of the misconduct.

Ms Rowberry was accused, in more than 20 allegations, of similar breaches to Mr Jones over the transfer of money from client to office account, and in addition of withdrawing £21,000 in cash from the firm’s client account and “carrying the same to the firm’s office without taking adequate or any steps to safeguard that money”.

Ms Rowberry argued that Hereford was “a world and a half away from London” and she “always had a large handbag with her”.

In a letter to the SRA ahead of the hearing, she described Herefordshire as a “very safe place” and said it was “not unusual for some folk to carry large amounts of cash”.

Describing how she collected the £21,000 from the bank, Ms Rowberry said: “As the cash was placed in a bag inside my capacious handbag, it was completely hidden from sight and no-one would have been able to tell what my handbag contained.”

Determining sanction, the SDT said she had no motivation for the misconduct, but “did not have her finger on the pulse. She chose not to see the monthly reconciliations and did not know whether [Mr Jones] had done what he said he would do to rectify the situation. By not ensuring she knew what was going on, it was reasonably foreseeable that harm could be caused”.

Also, though she did not actively conceal the wrongdoing, she did not report it to the SRA or put measures in place to ensure further transfers could not occur.

However, the tribunal concluded that despite being a “very experienced solicitor”, her actions were the result of “reliance she placed on representations made to her by her business partner of many years whom she trusted. This trust was misplaced”.

Her culpability was low but the overall seriousness of the misconduct was not, and the SDT decided that a fine was the appropriate sanction.

Given her “limited” financial means following the bankruptcy, the tribunal reduced what would have been a £10,000 fine to £5,000.