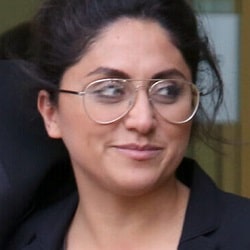 A 5’2” commercial property solicitor has been cleared of assault by beating after she hit a nightclub bouncer over the head with her stiletto.

Westminster Magistrates’ Court found that Vahideh Hojatoleslami was trying to protect herself and her boyfriend.

She left the bouncer with blood dripping down his face after striking him with her heel at the Loft Studio in Willesden, North London, at a Halloween party last year.

But Ms Hojatoleslami said she struck him because he had her boyfriend in a headlock and she was terrified.

She described being surrounded by security staff and feeling frightened: “I didn’t at any point think I was a threat to them. I don’t think they could say that they were scared.

“The aggression they used, it felt like a sudden attack – I didn’t have time to think about what I’d do next.”

The solicitor said she did not mean to hurt Mr Tayo but had her shoes in her hands because her feet were aching from wearing them.

Jo Sidhu, defending, claimed the bouncer had exaggerated what had happened. “‘The test is this – has the prosecution extinguished any possibility that the defendant acted in self-defence?

“She felt threatened and so reacted and she used the only thing she had in her hand –and that was a stiletto shoe. Given her professional occupation, one can only imagine how important it is for her to tell the truth.”

“We believed the defendant was getting scared. We find her raising her hand and hitting out was instinctive, she is a small woman of 5ft 2 inches and she was surrounded by a group of men.

“It is unclear what triggered that escalation but we find that the action was in self-defence. The verdict is not guilty.”

The solicitor was sobbing from the dock as her family rushed to hug her.

Mr Sidhu thanked the magistrates, saying: “She is in the early stages of her career. It could have meant her career would have come to a shuddering halt.”