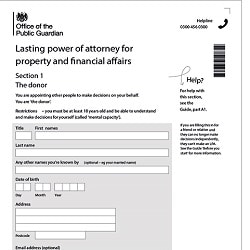 A solicitor who used his role as attorney to raid a vulnerable elderly client’s bank accounts has been struck off.

The Solicitors Disciplinary Tribunal (SDT) said George Stanley Lonsdale took a total of £6,100 for his own use through regular cash machine withdrawals from the bank account of ‘Mr D’, along with four rings, which the solicitor kept in a safe in his home.

Approving an agreed outcome with the Solicitors Regulation Authority (SRA), the tribunal said Mr Lonsdale “had been acting for a client who was 85 and vulnerable”.

The solicitor had been in a position of trust “which went beyond the usual level” and had access to Mr D’s property and money.

The SDT heard that Mr Lonsdale, born in 1950 and admitted in 1990, was an associate solicitor at Wright & Lord in Morecambe at the time of the misconduct.

Mr D, born in 1930, instructed the firm in February 2015. The following month Mr Lonsdale was registered as sole attorney under a lasting power of attorney which he prepared. Mr D, who was living in residential care, died in 2017.

Mr Lonsdale made a series of withdrawals from Mr D’s bank accounts, taking a total of £1,500 from his Barclays account in three instalments in February and March 2015.

In April 2015, Mr Lonsdale was given four rings, which he stored “in his personal safe at his residential address”. They did not appear in the vendor account for the sale of Mr D’s property by auction in August 2015, and “were not subsequently accounted for to Mr D”.

Shortly before resigning from Wright & Lord in December 2016, Mr Lonsdale paid back the money from Mr D’s bank accounts.

He admitted withdrawing cash from bank accounts held by a client of his employer in his role as attorney, for his own personal use, and failing to protect the four rings.

The SRA agreed to drop an allegation of dishonesty because Mr Lonsdale had agreed to leave the profession.

Mr Lonsdale said in mitigation that the cash machine withdrawals were done with Mr D’s consent and the money was returned.

The solicitor said he had “recently suffered medical issues which were ongoing” and “had stopped practising and did not intend to do so again”.

Mr Lonsdale was struck off the roll and ordered to pay £3,200 in costs.