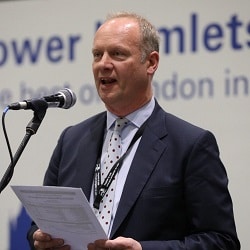 A solicitor and former East London councillor was jailed for 16 months after pleading guilty to two counts of housing fraud.

Muhammad Harun also paid compensation of £125,000 to Tower Hamlets Council after it provided him and his family with accommodation that should have been gone to a homeless family.

The sentencing judge, His Honour Judge Sanders at Snaresbrook Crown Court, said the length of time over which the fraud was committed, the multiple applications for social housing and false declarations warranted a custodial sentence.

“You made hundreds of bids for social housing and were a beneficiary of accommodation you were not entitled to,” he said.

Mr Harun had earlier pleaded guilty to the two counts of fraud at Thames Magistrates’ Court in September. He was elected as a Labour councillor on Tower Hamlets Council in May 2018 and stood down last December when the fraud investigation was first announced.

At the time, he told the local East London Advertiser newspaper that he would clear his name. “But I thought it best to step down and let others take over. It’s not wise or prudent for me to continue, but will devote all my energies into the investigation.”

The council said it began its investigation into the former Duncan Lewis solicitor after a tip-off. This highlighted his failure to carry out his legal duty to disclose relevant facts in relation to his applications for housing, specifically that he had purchased two properties whilst also having a social housing property.

He and his family were first housed in council accommodation in January 2006, and he bought the first property in July 2007. Nonetheless he continued with the temporary council housing, and was given a permanent three-bedroom home in 2010, which he sublet. He bought the second property in 2013.

The council said Mr Harun would not have been considered for social housing from the moment he purchased the first property.

Will Tuckley, chief executive of Tower Hamlets Council said: “This case sends a very clear message that whoever you are, you cannot expect to get away with fraud and depriving a homeless family of a safe and secure home.

“With one of the fastest growing populations in the country and 20,000 people on our housing waiting list, knowingly taking away such a precious resource is not only illegal but unforgiveable.”