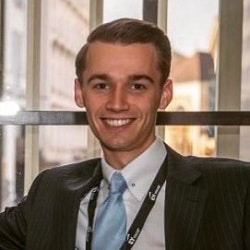 Matcham: App tries to understand what your situation is

An app to help small business owners diagnose and get guidance on their legal problems has gone live – with a consumer version set to launch later this year – in the wake of a huge research project by social lawtech enterprise Legal Utopia and Westminster University.

Fraser Matcham, chief executive of Legal Utopia, said the consumer app would be priced at just £11.99 for a year – a fifth of the price of the business version – to make it accessible to the “millions who need it and we hope will use it”.

He said the research, partly funded by the European Regional Development Fund, had shown that algorithms could effectively categorise legal problems without human involvement.

“We found that there was considerable consistency in the words consumers use to describe a problem, even when the composition of the sentence is different.

“This is where machine learning comes in. We carried out a feasibility study to see if an algorithm could categorise the problem into a field or a sub-field of law.”

The 10 fields of consumer law included conveyancing, wills and probate, family, and accident and injury, along with fields relevant to businesses, such as employment, intellectual property and tax.

Sub-fields included subjects such as divorce, redundancy and patents.

The research found that a classification by machine learning of the field in 146,536 data files, each based on an individual’s expression of their legal problem, could achieve an accuracy rate of up to 96%. With sub-fields, the rate increased to 99%.

For almost half of the 6,200 consumers studied (48%), email was the first form of communication, with a third (32%) using the phone to contact solicitors and 16% instant chat.

Interviews with a smaller group of 500 consumers showed that the “greatest implied understanding” of their legal problem was in contract law and intellectual property law.

The research also looked at the form of communication consumers and small businesses wanted to use to diagnose their legal problems.

A large majority (83%) of over 9,200 consumers and small businesses who responded to the question said they wanted to communicate using a mobile app.

When it came to price, another large majority (79%) of the 8,000 who responded said they would pay for a platform that could help them identify and resolve their legal problems if their monthly subscription cost between 99p and £9.99 per month.

Mr Matcham said a Legal Utopia Engine (LUE) app aimed at small businesses was piloted in Cambridge and Newcastle at the end of last year. It has now gone live, priced at £9.99 per month or £59.99 per year.

“The app tries to understand what your situation is. We ask you to explain the problem in your own words. The app can provide you with a diagnosis.

“We then ask you a series of questions to find out what you want to achieve and whether you need to take action. The app can then refer you to its legal guidance library.”

Mr Matcham said the app enabled business owners and consumers to identify legal problems without help from another human. It was up to them to decide whether they needed to see a lawyer.

“It’s up to people to make their own decisions. The app could convince you need to see a lawyer.”

He said the app did not refer people to lawyers, but had a database of legal services providers that consumers could use.

Mr Matcham added that the consumer version of LUE would be launched later in the year, costing £2.99 per month or £11.99 per year.