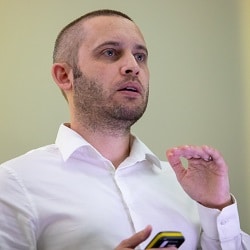 Borrett: Just one or two particular facets of SEO can let down a site’s performance

Two of the smaller firms in the UK top 200 law firms are leading the way on website performance, new research has found.

Stephensons, a national firm ranked 148th, was named as having the most effective website pound for pound, when adjusted to take revenue into account. City firm Pinsent Masons, top last year, fell to seventh place.

However, Irwin Mitchell maintained its grip on third place. The firm was also top in terms of its total score before the adjustment for revenue.

Digital marketing specialists Legmark studied the performance of the top 200 firms in terms of digital metrics and search engine ranking factors for the third year in its Legal Sector Website Performance Analysis 2021.

Smaller firms took the top spots when it came to speed of loading from mobile phones. Consultant-led firm Gunnercooke – which managed the single biggest improvement of its overall rating in the 200 – led the way, followed by BDB Pitmans, Lindsays and Stephensons.

This followed the pattern set last year, where the top positions were taken by firms outside the top 50.

Researchers said the “fluctuating results” for website speed demonstrated “how volatile mobile can be” and advised firms to “compress large images, switch your hosting provider or look to implement ‘lazy loading’, and if none of these options were available, focus first on their transactional pages, such as services or contact”.

Legmark said Blake Morgan’s website team had been “focusing heavily on link-building – with more than 13,000 links from sites in the business, industrial, jobs, education, law and government sectors”.

DLA Piper won again in the battle for the number of referring domains, or links to its website from third-party sites, with Pinsent Masons remaining the runner-up. Hogan Lovells retained third place.

Researchers said larger firms tended to “take pole position” in this category, thanks to their broad range of referring domains.

“Whilst you should focus on getting multiple, relevant links, you should take care not to have too many from one domain. Aim for a wide range from both journalists and legal or business sites.”

DLA Piper and Pinsent Masons kept their grip on first and second place for ‘trust flow’ − a way of measuring the quality of links pointing to your site. Hogan Lovells, Clifford Chance and Allen & Overy remained in joint third place.

The top firms for value per keyword were personal injury specialists Winn Solicitors and Scottish firm Digby Brown. They were followed by Slater & Gordon.

Rather than trying to rank for everything, researchers said smaller firms should “focus on their best converting services and push these, which will naturally increase value per keyword”.

Legmark founder Sam Borrett said: “The general trend from this year’s report appears to be that often just one or two particular facets of SEO can let down a site’s performance.

“Some firms fall short on link-building, many have low-quality content, while others are plagued by user experience issues.

“This year we’ve seen that almost all of the top 10 largest law firms have improved their performance from last year’s data but many firms have not yet prepared their sites for Google’s major algorithm update that will penalise slow websites.”

He stressed that Google was in the business of “delivering the right content to the right searcher to best answer their query”.

That meant firms able to produce “the very best content” on a particular subject have a good chance to get on to page one.

“If you optimise your website to within an inch of its life but don’t have great content, you’ll struggle to get to the top of Google search results. Content is still king.”