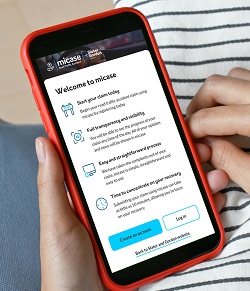 Slater & Gordon has launched ‘miplatform’, what it says is a ‘first of its kind’ digital legal service that enables clients to progress their matters with little or no direct contact with a lawyer.

It has gone live with ‘micase Road Traffic Accident’, which will help injured people bring claims through the government’s new Official Injury Claim (OIC) portal for road traffic claims worth up to £5,000, which went live yesterday.

The self-service platform, which has the tagline ‘Bridging the gap to justice’, will be expanded to areas like family, conveyancing and wills in the coming months, as well as non-small claims track injury cases.

Though the OIC is aimed at litigants in person, there are concerns that it is not sufficiently user friendly and Slater & Gordon anticipates that many claimants will still seek legal help to navigate it – even though legal fees will not be recoverable from the defendant insurer.

Matt Jarvis, Slater & Gordon’s managing director of personal injury, explained to Legal Futures that the system was more than online portal – “it is giving the client a truly digital service that’s not focused around a case management system”.

It is a “pure online journey” available to users 24 hours a day; where they need to ask questions, they will be encouraged to use online chat rather than the telephone, although there will be extra help for those who need it.

There will be human interaction prior to any litigation process, he added.

Mr Jarvis said the system used machine learning in places – having it read medical reports is on the horizon – and this would have more of an effect as the firm gathers more data.

The firm is looking to build artificial intelligence into assessing liability and fraud as well.

During the development phase, micase RTA received input from more than 18,000 users – significantly more than the OIC itself.

Slater & Gordon’s expectation, Mr Jarvis went on, was that few people would be able to use the OIC without advice; clients will sign up to a damages-based agreement where the firm will take 25% of any damages.

“We think the clients are going to want a reputable firm helping the through the process,” he said. The OIC portal “could have been amazing” – particularly by including ADR – but he said it had instead been rushed.

Slater & Gordon’s chief executive, David Whitmore, said: “Our miplatform will revolutionise the consumer legal industry. It’s designed to use advanced technology to bridge the gap many people find is between them and achieving justice.

“Often customers fear getting legal support is too expensive, complex or inconvenient. By combining technology with our experts, we’re providing a solution – putting customers in charge of their case.”

He predicted that miplatform would “change the way people access legal services, similarly to how Amazon changed online shopping, Netflix the entertainment industry and Uber how we travel”.

Jon Grainger, the firm’s chief information officer, said this was “the next phase of automation” by using ‘micro AI’ – “the ability to make small decisions quickly, leaving the big decisions to our customers and fee-earners”.

In April 2018, Slater & Gordon announced it would be investing over £30m in technology over the following three years.