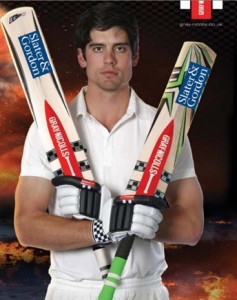 The announcement yesterday that Alastair Cook has become a brand ambassador for Slater & Gordon (S&G) failed to spark a turnaround in the embattled England cricket captain’s fortunes, as he was out for just five in the first Test against India.

The news came as the alternative business structure announced an employee share scheme that will see it match the investment of UK staff up to £375 each.

As part of S&G’s efforts to build its UK brand, the Australian-headquartered firm’s logo will feature on Mr Cook’s cricket bat during all of his England and Essex matches until the end of the year.

As a brand ambassador for the firm, he will also make appearances at S&G events.

Mr Cook, the youngest man in the history of cricket to score 7,000 Test runs, said: “I am thrilled that Slater & Gordon will be supporting me during a very exciting period for English cricket and I look forward to representing the firm both on and off the pitch.”

His captaincy is under growing pressure in the wake of last winter’s Ashes whitewash in Australia and the home series defeat to Sri Lanka last month.

S&G told the Australian stock exchange that it would be seeking shareholder approval of a new employee share scheme that aims “to encourage staff retention, drive achievement of performance objectives and further align employee and shareholder interests”.

It added: “The board considers equity participation a fundamental component of an effective executive and employee rewards strategy.”

The plan is to issue an estimated 1m shares (or 0.5% of current issued capital) to employees each year in both Australia and the UK. It said: “Initial grants are intended to be made on a ‘matching offer’ basis. That is, [S&G] will match on a 1 for 1 basis employees who invest in shares up to a limit of approximately $500 for each participating employee in Australia and £375 for each participating employee in the UK.”

The firm is also proposing long-term incentives for up to 60 key staff in the form of performance rights to be granted subject to “a minimum three-year service vesting requirement and generally accepted market-based performance conditions”.