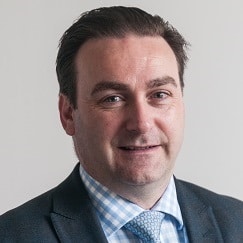 Simpson Millar has unveiled a five-year £50m growth strategy to become one of a handful of consumer legal brands, starting with the acquisition of Liverpool practice EAD Solicitors.

The announcements are a major statement of intent by the firm, after it suffered under the ownership of Fairpoint Group PLC, which delisted and collapsed in August 2017, and had to cut 20% of staff last year as a result.

He admitted that the deal had been accelerated because EAD’s partners had filed a notice to appoint administrators, even though its most recent accounts, for the year to 30 April 2017, showed a £2.2m profit on a turnover of £6.6m, although that was down from £7.3m the previous year.

Mr Cox suggested that EAD had suffered due to the 2013 LASPO reforms and the need to invest in technology, and predicted that many more smaller firms, under the same pressures, would fail over the next 18 months, especially with the government’s next round of PI reforms due to be implemented in April 2020.

“The deal enables Simpson Millar to extend its geographical footprint into the north-west, adding to its network of eight offices across the UK whilst building on EAD’s strong reputation in Liverpool and its close relationship with a number of large trade unions,” he added.

The deal was just “one of a number” he was currently looking at, ranging from buying existing books of business to whole firms.

Mr Cox said he was receiving calls on a near-daily basis from willing sellers; currently 55% of Simpson Millar’s turnover is attributable to PI and clinical negligence.

The strategic plan is being funded by Doorway Capital, which helped the firm survive the collapse of Fairpoint and in January 2018 became its owner.

Mr Cox said Doorway trusted the management team to make the strategic decisions independently, to the extent that it does not have a seat on the firm’s board.

Simpson Millar, which has 470 staff after 70 joined from EAD, is on track to record turnover of around £30m this year and Mr Cox said the intention was to get to £50m in the coming years.

Reflecting the changing legal market – particularly in PI – Mr Cox said growth would also come through developing its own “direct to market” channels; he expected some referrers of work to be “squeezed out” because of the government reforms and the Financial Conduct Authority taking over the regulation of claims management companies.

Mr Cox predicted “very significant consolidation” in the consumer legal market, leaving only five or six major brands, of which Simpson Millar intended to be one.

“You have to have scale to justify the level of investment in technology [that is required],” he explained. There would also be a few niche firms that remained successful, but “the middle won’t be that pleasant a place to be”.

While most of the brands would be existing law firms, he suggested that a claims company that decides to move into legal work could also be one, while there may well be a new entrant to the market.

A firm statement said: “Simpson Millar will seek to build its brand and market share while using technology to deliver an enhanced client experience through new operational platforms and quicker internal processes.

“It will also seek to give clients greater choice in how they meet their legal needs, providing them with options ranging from full service, assisted service and self-service, all offered at different prices.”

Mr Cox said this was part of a commitment to have “solutions for everyone”.

Meanwhile, another of the big consumer legal brands, Slater & Gordon, recorded a loss of £52m in the year to 30 June 2017, newly published accounts have shown.

However, the firm’s financial position has changed radically since then after it was separated from its Australian parent at the end of 2017, and is now owned wholly by hedge funds that have converted their secured debt of £386m into equity.

Slater & Gordon announced in May that it would invest over £30m on new technology and broadening its services over the following three years, and we understand that an announcement on its plans to enter volume conveyancing is due in the coming weeks.

Chief executive David Whitmore argued that the results were mainly relevant to show “the very significant change that this business has gone through” since then.

He said he was “quite bullish” about the future, with the firm in profit by the end of 2018.