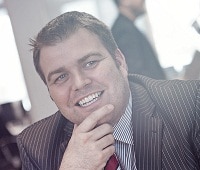 Masheder: ability to manage business in difficult times is key to growth

Yorkshire’s largest conveyancing firm has set up a £150,000 training academy after its workload trebled in the past two years.

It comes as the Law Society has predicted increased turnover growth in the legal sector this year and next, in part because of the recovering property market.

Nick Masheder, head of conveyancing at Beaumont Legal, said the firm had 40 graduates working as legal assistants in its academy scheme.

The graduates, some of whom have law degrees or LPCs, can move on to the role of “conveyancer” in 12-18 months, before being considered for “team leader” after three years.

Alternatively, they can apply for the role of trainee solicitor at Beaumont Legal, and get a full range of legal experience. The firm, based in Wakefield, does not appoint external candidates as trainees.

Mr Masheder said the conveyancing department had grown from around 60 to 150 people since September 2013, and was in the process of moving to a separate building near the firm’s existing office.

“Our ability to manage the business in difficult times has put us in the position we are now,” he said. “During the recession, we increased our market share. A lot of people left the industry in those dark days and trying to recruit enough quality people has become very difficult.”

Mr Masheder said graduates straight out of law school needed “day-to-day experience of conveyancing transactions”, and although they spent some time away from clients in the academy, it was “definitely not a classroom-based experience”.

Other major conveyancers, such as Countrywide Conveyancing Services and myhomemove have also launched their own academies in the last year or so.

The Law Society’s latest forecast predicted growth in real turnover of legal services of 3.8% in 2014, jumping to 4.9% in 2015, near pre-recession levels.

It said the increase in housing market activity was the main factor driving growth, along with the improvement in the performance of the business sector. Net exports could grow nearly 8% next year, the society added.

Law Society president Andrew Caplen said: “The forecasts are good news for solicitors. If household incomes rise as predicted, our members with clients buying and selling property or needing legal advice for their businesses will benefit from housing market and business activity. High export predictions for 2015 will be welcomed by firms of all sizes having a role in meeting the increased demand for international transactions.”

The figures are based on current macroeconomic forecasts of the growth in households’ real incomes.

In a separate development, Optima Legal, which obtained an ABS license in May and is part of Capita, has launched an apprenticeship scheme.

Optima will offer 15 young people work experience at its Leeds office which, combined with a training programme at BPP law school in the city, will give them the chance to achieve National Vocational Qualification Level 3.

David Ashcroft, managing director of Optima, said the legal apprenticeship scheme was another example of the firm’s commitment to “invest in innovative and progressive initiatives”.

A Capita spokeswoman added that the scheme, which is being run in association with Capita Talent Partnerships, could be extended to London and Newcastle.

Apprentices need to be aged 16-24 and hold five GCSEs, including English and Maths.