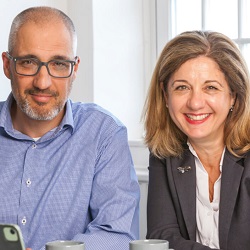 The sister and brother partners of an Essex law firm have rejected acquisition offers from larger firms and decided to transfer their shares to an employee ownership trust (EOT).

Melinda Giles said being the “smaller entity” in a merger that was really an acquisition would mean “losing control over the culture and flavour” of Giles Wilson.

Ms Giles said the pandemic was a “key factor” in the move to an EOT for the firm, which has two offices in Leigh-on-Sea and 35 staff. She and her brother, Philip Giles, had thought about it before 2020 but not done it.

“It seemed to us that it was something for larger firms – you think about John Lewis. In fact it is possible for firms of any size.”

Ms Giles said the way Giles Wilson bonded during the pandemic, with employees caring for each other “and the absolute team spirit”, helped convince the pair that an EOT was the right solution.

They considered whether the firm could continue in the traditional way, by younger solicitors acquiring equity, but the generation following them was less keen to take on debt.

“There is a big gap between the generations. This was the only option for everyone to join in and have a future.”

There has been a steady trickle of law firms embracing EOTs – this year, we have reported on central England practice Family Law Group and Ison Harrison in Yorkshire.

Ms Giles said she and her brother bought the law firm 25 years ago from their sole practitioner father, to stop him from selling it. They were both young and not earning much and needed a bank loan to buy John Wilson & Giles.

She was a student in France at the time and, unlike her brother, had no legal qualifications. “I had no interest in becoming a lawyer. I was simply helping in the office for a couple of weeks, but I enjoyed the clients.”

Ms Giles qualified as a solicitor through the CILEX route and was in the first cohort of part-time legal practice course students to take the course in 1994.

Mr Giles is a specialist in divorce and contentious probate, as well as being a deputy district judge. He is head of contentious matters at the law firm, while his sister, head of non-contentious matters, specialises in Court of Protection work and mental health law. She also represents private client solicitors on the Law Society council.

Now aged 58, and with Philip aged 52, she said becoming an EOT was about “future-proofing” the firm, not retiring.

The siblings have agreed to stay on as partners for at least another five years, while the EOT repays its debt to them for the acquisition over the same period.

The transfer of 100% of the shares to the EOT, with Giles Wilson LLP becoming Giles Wilson Law Ltd, will go live on 1 July and be celebrated with a 25th anniversary party.

Ms Giles will be a director of the firm, which converted to an alternative business structure as part of the process. She will be joined by head of commercial Roy Daby, two representatives from the elected employee council and an independent trustee director.

She said the “day job” for her and her brother would not change and the “overwhelming message” from staff was that “they hope that nothing much will change.”

Ms Giles said the firm, which bought a smaller practice in 2015, would be looking to expand next year, both by making further small acquisitions and recruitment.

“I hope I never retire, though it depends if they want me. Neither of us have any plans to retire.”

Ms Giles said an advantage of having a brother as business partner was “trusting each other completely”, something that was “crucial and hard to find”.

It meant the firm could make “nimble decisions”. She added: “We can meet on the beach at eight o’clock in the morning for half an hour, walking our dogs, and make a major decision for the business.”