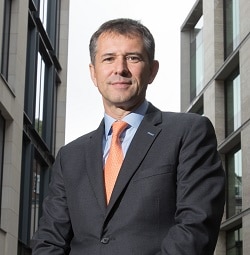 Shares in listed firm Keystone Law shot up to an all-time high yesterday on the back of revenue up 38% and profits more than double in the first six months of its financial year.

Chief executive James Knight told Legal Futures that the consultant-led practice had benefited from the “commercial rebound from the pandemic” along with “some fairly significant savings” from not holding physical events.

Mr Knight said all practice areas have “pretty uniformly picked up and been busy”.

The share price jumped 10% to 838p, having started the year at 505p. Pre-pandemic the shares had reached a high of 640p before slumping to 365p in the immediate aftermath of lockdown, in line with the whole market.

Investors were told that “the ongoing disruption and uncertainty caused by Covid-19 restrictions, now combined with the generally robust levels of activity across the legal industry, encouraged high-quality candidates to remain where they are rather than seek new opportunities”.

It received 136 new candidate applications in the period, down slightly on last year – 36 offers were made and 28 accepted.

Mr Knight said: “We are well positioned to take advantage of the opportunities that will result from the further impetus generated in the legal recruitment market as the Covid-19 restrictions are fully relaxed and potential candidates are required to return to the office during the second half of this year.

“As such, we are confident that we will deliver another good performance during the rest of this year which will be materially ahead of current market expectations.”

There remained plenty of scope for Keystone to continue growing, he went on. “The market we operate in is worth £9bn and we turn over about £60m, so we’re only really scratching the surface.

“It’s important for us as a business to scale in a thoughtful manner to make sure that all the aspects that make Keystone a success in the first place are maintained.”

Mishcon de Reya announced last week that it was to become the next listed law firm and Mr Knight said he though it was the right type of practice for such a move.

“Law firms that do [float] will by and large have an aspect of uniqueness to them – that’s what investors are looking for. They’re not just looking for a conventional law firm converting from being an LLP.”