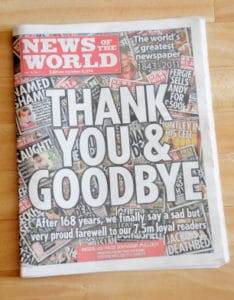 News of the World: surveillance allegations thrown out

Julian Pike, at the time a partner at London firm Farrer & Co, was cleared of ordering the surveillance of Charlotte Harris and Mark Lewis in 2010 without justification, or without limiting its scope.

The SDT ruling [1] referred only to the initials ML and CH, but the fact they were the subject of the surveillance came into the public domain during the Leveson inquiry in 2011.

According to the ruling, Mr Pike, who had advised the News of the World (NotW) in defending civil proceedings from 2007, was convinced they were having an affair and sharing information about cases. In the event, the surveillance found no evidence of an affair.

In a 2010 email to the NotW’s former legal manager, barrister Tom Crone (also unnamed in the ruling but clearly identifiable), Mr Pike suggested that News International try to prevent the pair from acting and described them as “deeply untrustworthy”.

The NotW ordered the surveillance of Ms Harris, Mr Lewis’s ex-wife and his daughter. Mr Lewis sparked the Solicitors Regulation Authority (SRA) investigation when he complained in December 2011.

In August 2016, the Bar Tribunals and Adjudication Service (BTAS) unanimously rejected professional misconduct charges against Mr Crone over the surveillance.

The tribunal recorded that while “the spectre of solicitors carrying out surveillance on each other was repugnant”, it accepted that Mr Pike had “an unshakeable, but honestly held, belief that [his opponents] had committed repeated acts of serious misconduct”.

“Indeed the respondent had described ML as ‘mad, bad and sad’, language which the tribunal considered to be most unfortunate.”

It did find Mr Pike’s evidence to have been “open, frank and credible” and that in the circumstances – accepting that Mr Pike had considered alternatives and concluded that none of them would achieve their intended objective – the tribunal “could not be sure to the requisite standard that the decision to advise [his client] to mount surveillance was made without proper justification”.

It noted that BTAS had dismissed the allegations against Mr Crone and accepted Mr Pike’s explanation that Mr Crone could reasonably be left to ensure that carrying out the surveillance would be lawful.

In seeking a contribution of £20,000 from Mr Pike towards the more than £100,000 cost of the case, the SRA argued that the respondent had to some degree brought the case on himself, citing Lord Justice Leveson’s conclusion that carrying out surveillance was “dubious at best”.

Mr Pike pointed out that he had himself received no criticism from Lord Justice Leveson and that it was “risible” that he should pay costs based on his  comments.

The SRA contended the contribution sought was “modest” and that “surveillance of opposing lawyers could only take place in the most unusual of circumstances and the tribunal should send a message that, in those circumstances, solicitors had to insist on parameters”.

The tribunal ruled that while Mr Pike had not brought the proceedings on himself, “in all the circumstances a modest contribution to the costs was appropriate” and ordered that he pay the £20,000.

The ruling followed a three-day hearing in November, at which both parties, and News International as intervener – an unusual move at the SDT – were represented by QCs.

The ruling was redacted in places because the SDT sat in private for part of the hearing to consider legally privileged material.