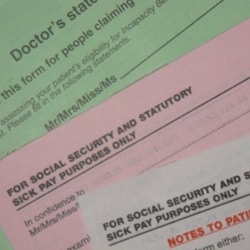 An experienced solicitor has escaped with an indefinite suspension instead of being struck off after a disciplinary tribunal accepted her plea that she had falsified a GP’s sick note to support an adjournment application while suffering from mental ill-health.

Sandia Kumari Pamma admitted committing the misconduct – which also involved misleading her firm and a court that her client was too ill to attend a hearing when he was fit – because she had failed to prepare for the hearing.

The Solicitors Disciplinary Tribunal (SDT) agreed she was suffering from moderate mental illness when she acted “out of character” after complications following a miscarriage and traumatic births, but recommended the suspension last at least five years.

The solicitor, an immigration specialist who had some 10 years’ experience at the time, was born in 1976 and at the time of the misconduct, in October 2016, was a non-practising consultant engaged by Duncan Lewis solicitors.

She was also a director of City Law Immigration, an unrelated immigration firm regulated by the Office of the Immigration Services Commissioner.

Duncan Lewis reported her to the Solicitors Regulation Authority (SRA) after the Judicial Office complained about events at a hearing at the Birmingham Immigration & Asylum Chamber.

It was alleged that Ms Pamma had faked a doctor’s certificate taken from the file of another client and notified her firm both that her minor client was too ill to attend the hearing and that she had asked for an adjournment.

When the adjournment application was refused for lack of medical evidence, because she had apparently failed to attach the falsified certificate, she instructed a consultant solicitor colleague to argue an appeal against the refusal.

However, the minor client and his foster parent attended the hearing, and confirmed he had not been ill and that the sick note was not genuine. Upon learning this, the colleague withdrew from the case, professionally embarrassed.

The case was adjourned to give the client time to seek alternative representation.

The original report to the SRA attached correspondence in which Ms Pamma explained she requested the adjournment because she had not prepared for the hearing.

Giving evidence, Ms Pamma admitted the misconduct alleged in all but a few small details and described the falsification as “preposterous”. The tribunal found her a credible witness “who demonstrated both remorse and insight”.

In mitigation, she argued that she had suffered from events associated with undiagnosed birth complications some years earlier and that the trauma had contributed to her misconduct.

She did give birth around three months before the events giving rise to the allegations, and was signed off sick with post-natal depression shortly afterwards. Ms Pamma told the tribunal that she was angry with herself for not recognising that she was not coping.

She claimed that her workload as a consultant, together with her own practice at City Law Immigration, was typically between 30 and 40 cases at a time; she had taken on the consultancy to help prop up City Law.

She provided the tribunal with a report from a consultant psychiatrist, who diagnosed a moderate depressive episode at the time of the events.

The tribunal found the misconduct was “close to the top end of the scale of seriousness for a solicitor” and that, while not lengthy, the dishonest acts could not be described as momentary.

However, while deliberate, the misconduct was neither “calculated” nor “rigorously executed”.

Dishonesty had been “alleged, admitted and proved”, the tribunal said, but Ms Pamma had shown “genuine insight” and “deep remorse”.

The tribunal recorded it “accepted the medical evidence provided by her which showed that she had been suffering from a medical condition at the time of the events and was not fit for work”.

While the tribunal did not believe the misconduct met the ‘exceptional circumstances’ category of dishonesty cases, given that it extended over several days, it nevertheless found the personal mitigation was persuasive and that she had acted out of character.

The tribunal said it was “satisfied that there was no realistic chance of such conduct being repeated and that the combination of circumstances which gave rise to it was a one-off”.

While striking off would ordinarily be appropriate in a case such as this, the tribunal was satisfied the “respondent would not find herself in the [same] circumstances… again” and that she did not present a risk of “harm to the public or the reputation of the profession”.